Chapter 18–There Are Some Things You Can Only Learn in a Storm. 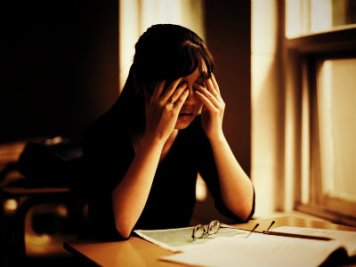 Did you ever avoid doing something because it was difficult?  That’s where I am today as I type this next chapter.  You can probably tell by the narrative that Roger’s time on earth is short.  And that means as I relate those last days, I have to relive them, too.  Blech.  It’s hard.

And I did have a total hip replacement four weeks ago (July 1, 2015); that’s my superficial reason for not publishing.  The real reason is…it is so hard.  But, I am feeling better, and my mind is clearer, so let’s forge on.

From my hospice journal:

Dear kids and family and friends,

The nurse came this afternoon.  Well, I need to back up just a bit. This morning my good friend and kindergarten teacher Karla paid for me to have a massage. It was so nice and relaxing. She and my Title I teacher Kim stayed with Roger.  They even cleaned the bathrooms.

Then Kari came with the Girl Scouts money that they had raised for us to help with the gas expenses. That was so sweet and we really appreciated that.

Gas money from the scouts

Then the hospice nurse came; her name is Beth. She is really sweet, and she answered a lot of my questions.  I am very encouraged about what options I have. The nurse will come next week Monday and Thursday and on the week of Thanksgiving she’ll probably come Monday and Friday so the kids will get to meet her.

The CNA will come probably Tuesday and Friday. Not quite sure yet on that. And then I was able to explain to the nurse some of my concerns and questions. For example what do I do if he falls? I’m having a difficult time moving him. What is my next plan of action? What help can I get?

She said that their agency has a list of names of people who can provide me support and stay with Roger. One thing she said was someone could come for eight hours while he’s sleeping at night and then I could get some good rest in another room. This would cost but I think it would be worth it, and it would be cheaper than going through an agency.

That really encouraged me. And then she discussed about there might come a time when he just goes from the bed to a chair next to the bed and back-and-forth like that.   She liked how the room was nice and large and that he could get to the bathroom easily. If I hired someone to spend the night with him, they would sit in the chair in the room and I would sleep elsewhere. So we are thinking– I am thinking that is –about how we can configure the room.

She showed me how to get him up using leverage, but it is still hard.

He is so compliant, but not able to comply. For example, I said, “We need to get up and get your pants changed.” He said, “Okay.” And he did nothing. We went back-and-forth like that for a while. Finally I just had to get him up by myself. He did help me when I made him get up and get into bed. He really had to hold on to me while we were walking.

He is still pretty non-conversant, unless you ask him a question. His eyes are vacant.  And he is content just sitting.

On a lighter note, I have made a note to myself: DO NOT LET ROGER STAND IN THE BATHROOM OR ANYWHERE ELSE WITH NO CLOTHES ON.  He can pee without any thought or preparation. Yup, twice he did that at 4 o’clock in the morning.

Bill Fleming stopped by to check on me. He lost his wife Blanche to cancer and had hospice for about a week. I just keep thinking that this will last longer than that.

And, brother Dean and Sarah stopped by to visit at the same time, too. It was so nice seeing them again. Roger was sleeping so we all sat around the table and talked.

Elaine and Michan arrived and it was so good to see them.  I will be able to learn so much from Elaine and how she helped her mother in her long last days.

The Bradshaws came to have some fun playing cards with us.  Roger was awake and sat at the table with us and even smirked several times.  It was a good time for me to have some laughter and interchange with good friends. Then before they left we had the guys move the end table and the ironing board from the bedroom upstairs.  Elaine and I thought and measured about how to move Roger’s dresser out so we could have room for a person to sit with him at night.

I love you all.  MAMA

Elaine did come, and Roger perked up so much. She was a ray of sunshine (and an excellent shaver. Roger didn’t panic too much when he realized she wasn’t using a razor blade!) 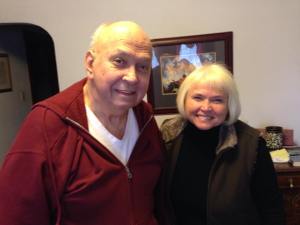 Roger and his little sister Elaine

I love the look on his face.

From the journal entry in the book Hospice gave us:

I was so grateful for the help that Roger’s sister Elaine gave me.  She helped me move things and organize them to help Roger.  We moved the queen bed upstairs and put the twin bed downstairs in our bedroom.  That made more room for family to visit.

While Michan (Elaine’s daughter) and I went to church, Elaine spent some quality time with Roger. They left to go home to Indiana that afternoon.  I often wonder if Elaine knew it might be the last time to see her brother alive.

I had a concert that night, so the Gruens stayed with Roger.  When I got home, they said that Roger just  picked at his food, and he was really hard to get up and walk to bed.  He slept all night (good for me), and I did, too.  I took an oxycodone; it really helped with my aching hips.

The nurse and the CNA came, and we talked about more things. I told her about how Roger had a hard time walking the previous night. She ordered a wheel chair and said that the chair might help him getting for one to place to another.

We discussed a catheter, and she said that she could put it in any time. Maybe Thursday. If he were in a wheel chair it would be easier than walking around with a leg bag.  She said they usually kept catheters in for a while, so it wouldn’t be an issue.

I asked her, explaining that I knew she couldn’t say exactly, “How did you think this disease would finish out?”  She said that with her experience with cancer, it would/could progress quickly, I’m not sure what that meant, but I expect to see a quick decline in daddy.

I had met a family who lost a brother to just exactly what daddy has. They did not do radiation or chemo. He died 89 days from diagnosis. I hear about other situations and I think, “This storm is sucking me in, and I don’t see anyway out.”

Roger ate a little, and I got him to bed for a nap.  He was so hard to get up from the chair.  The nurse said that I would know when he would have to stay in bed.  I was beginning to think it was getting close.

My good friend Carol stayed with Roger while he slept so I could run to Walmart.  When I got back, he was soaked. I hated to have him on a catheter, but I knew it would help me.

My prayers now consisted of, “Lord, please take him quickly.  You have numbered his days, and if I can be a help to someone by going through this, then keep him here.  But I honestly don’t know how much longer I can do this.”

This entry was posted in Uncategorized. Bookmark the permalink.

8 Responses to Chapter 18–There Are Some Things You Can Only Learn in a Storm.