Chapter 11–Emotions That I’m Not Proud Of

For the first time since Roger died I felt guilty about having fun–enjoying myself–being normal. State of Grace Trio had a lot of gigs scheduled for August, and the first one was a three hour concert on the main state at the Findlay Walleye Festival.

I had posted pictures of the event, and in retrospect it did look like I was having a great time.  A friend texted me. “Are you tired after being on a stage for three hours?  You look great,” to which I replied, “It was so much fun. I just love doing this.  It was hot but not too bad.  I just have had a lot of energy.  At least my hair wasn’t frizzy. Surprise, surprise!” 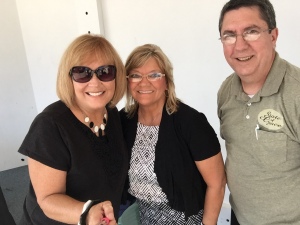 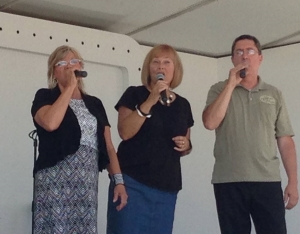 She replied with a simple text. “I’m glad you’re happy.”

A simple honest reply with no undertones.  A sincere reply—someone thankful that I was happy.

But I took it the wrong way.  I took it that she was reprimanding me for being happy.  I read it this way:  “Well!  At least YOU are happy.  We are all still sad that Roger is gone, grieving for him and there you are running around having a good old time.  Shame on you. You should still be sad.  Your grieving time is not over yet!”

How foolish of me.  That’s not what she said.  That was the devil getting into my mind and trying to make me bitter and resentful.

Lance and Lisa left after being here a month for my hip surgery.  It was quiet, and I missed them. While they were here I actually said for the first time, “I’m ok being alone.  In fact, I’m getting rather used to it.” Funny.  I never ever thought I would say that.

But with them gone, it was quiet again, and I kind of wished they were back.  I’m sure part of the reason was that my hip was not fully mended.

Another odd thought came through my mind.  Not a bad one, but a startling one.  Was it time to take my rings off?  No, not yet, but it might be nearing. Maybe after Thanksgiving. Maybe earlier. I would know when. Not that I was thinking of meeting anyone.  Definitely not.  It’s just that I was totally aware that the rings made me look like I was still married. And I wasn’t.  I had read somewhere that I would know when, if ever, the time came to take my rings off.

I had a good friend hurt my feelings, and though I usually let things “roll off my back,” for some reason I just couldn’t let this go. I mulled over the details and could have easily justified my hurt.  If I shared with you the entire story, you would probably agree.  Yet the bottom line was that my feelings were hurt because of my carelessness.  It was my fault.  And sin reared its ugly head and made me want to twist the situation to my advantage.  Pride.  Sin.  Yup.  That’s what it was.

The thing is, it was my fault.  And sin reared its ugly head and made me want to twist it that I was ok and my friend was the one who overreacted.  Self-pity.  Pride.  Sin.

And then this GriefShare email came.

Self-Pity Day 250
“A Christian needs to take himself by the scruff of the neck and begin thinking as God thinks and cut out the self-pity,” says Elisabeth Elliot.

Self-pity is a dangerous emotion that can slither in and block all your forward progression toward healing.

“That is a dead-end street that you are choosing for yourself,” continues Elliot. “If you decide that the whole world needs to feel sorry for you, and you need to be surrounded and hovered over and propped up, that is certainly what you would call self-isolation.

I came across this article about grieving, and it fit perfectly with the “brainstorms” and “heartstorms” I had gone through.

As for grief, you’ll find it comes in waves. When the ship is first wrecked, you’re drowning, with wreckage all around you. Everything floating around you reminds you of the beauty and the magnificence of the ship that was, and is no more. And all you can do is float. You find some piece of the wreckage and you hang on for a while. Maybe it’s some physical thing. Maybe it’s a happy memory or a photograph. Maybe it’s a person who is also floating. For a while, all you can do is float. Stay alive.

In the beginning, the waves are 100 feet tall and crash over you without mercy. They come 10 seconds apart and don’t even give you time to catch your breath. All you can do is hang on and float. After a while, maybe weeks, maybe months, you’ll find the waves are still 100 feet tall, but they come further apart. When they come, they still crash all over you and wipe you out. But in between, you can breathe, you can function. You never know what’s going to trigger the grief. It might be a song, a picture, a street intersection, the smell of a cup of coffee. It can be just about anything…and the wave comes crashing. But in between waves, there is life.

Somewhere down the line, and it’s different for everybody, you find that the waves are only 80 feet tall. Or 50 feet tall. And while they still come, they come further apart. You can see them coming. An anniversary, a birthday, or Christmas, or landing at O’Hare. You can see it coming, for the most part, and prepare yourself. And when it washes over you, you know that somehow you will, again, come out the other side. Soaking wet, sputtering, still hanging on to some tiny piece of the wreckage, but you’ll come out.

The service Sunday night at church was moving. So moving that I cried at the altar. Dave McCrosky spoke, and of course he reference his wife’s recent death in March. Everyone was moved; however, I was visibly filled with emotion. I just kept thinking of Roger and how I missed him. I wonder sometimes how I will go on. There have been so many times that I think back to how nice it was to have another person to drive me somewhere. To go with me to appointments.  To work with me on projects. I miss him. The love of my life. I want someone to take care of me and to help me. And it’s almost 9 months since he has left. I’m not trying not to wallow in self-pity. I am just so sad. I’m not feeling sorry for myself. I just miss him. And he’s not coming back.

Add to this that I have nothing to do this Friday night. Same as last Friday night. I just wish there was someone who could come over and play a game with me. Everyone else has someone on a Friday night, but not me.  Even if my kids could be here. That’s where it would be nice to have family close.

I finished my blog about Roger’s diagnosis and death and chatted with Lance about whether I should start a new blog for the “after the death” storm.  He encouraged me to keep writing about the “heartstorms.”

As I looked for pictures that would be fitting for the last entry about Roger’s death and funeral, I stumbled upon and watched again the videos of Roger actually dying.  I remember considering putting them on the blog, but I just couldn’t.  They were so incredibly personal, tender, and gut-wrenching. Watching him take his last breath, hearing the phone calls Stephanie made to let his siblings know…I wept and wept.  I had lived it nine months ago, but to see it fresh was horrible.  Crying was cleansing, but caused the wound to open again.  Psalm 94 became a salve for my soul.

I heard this at church one Sunday in August:

God will supply all of your needs

And then I asked myself:

How could He supply my emotional needs without human interaction?

How could He supply my social needs without human interaction?

Those were honest questions I grappled with.

Can you laugh with me about a mowing accident?  I got the mower wedged and stuck behind the garage.  Evidently if you go over some concrete and the grass is lower on the other side, and if you try to back up, you might get stuck.  I even tried to figure out how to mash the lever that lets you rock and move the mower manually.  Ha.  Me move that big thing manually?  Not happening.  So, I called neighbors Bill and Sally to help.  He very aptly did what was needed to be done and patiently waited for me to return from looking for the manual. I was so thankful. 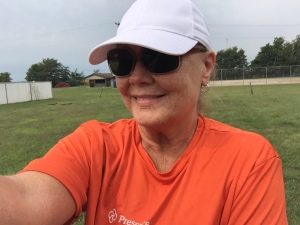 I even killed some weeds 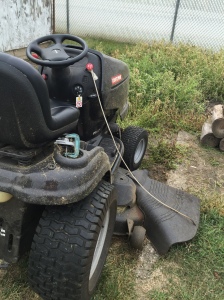 And then I got stuck

Friend Bill waiting on me because… 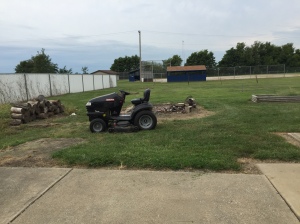 …he had gotten it unstuck!

But I found myself wishing I had a man around the house.  A rich man.  Not a husband, but someone who could take care of the “stuff.”  And then I asked the Lord to help me get through the rough stuff.  I didn’t ask Him to make it easy. But I asked him to help me ask for help and figure things out.  And I asked Him to help me be content, as hard as it was.

I was able to spend a week at Chad’s to help with the kids while Stephanie had Teachers’ In-Service.  It was a great time.  Grace and I made cookies—lots of them—for the kids’ lunches.  It was a blessing to Stephanie, and helped me feel like I was helping.

A record of what we did

Coffee on the deck

Reading on the deck

Lauren got her permit

Doing my draft for fantasy football

Snorting. (It wasn’t cocaine…just flour. It was a joke. Really.

I read this at the end of August. It fit me perfectly regarding my faith and questions about truth, life and what I believed.

“That is why you must train yourself in biblical hope where you are absolutely convinced that God is and that He has a world to come for you and that on the other side everything will be okay. That certainty has to be bigger than the certainty of your sorrows.”

Ideally, this biblical training should come before times of adversity, so you can be at least somewhat prepared to face it. But if you are not absolutely sure that God is everything He says He is, then tell Him your doubts and confusion. Study the Bible to learn more about Him. We suggest that you begin reading the book of John or Mark.

OBSERVATION: A crisis reveals who you really are—the good, the bad and the ugly.

OBSERVATION: Reviewing the past will keep the past open and raw.

OBSERVATION: Grief does come in waves.

HELPFUL HINT: Be honest with your faults. Don’t be embarrassed. It will help you grow.

HELPFUL HINT: Give in to laughter. Life goes on even when you think yours has ended. (Grandkids truly put life into perspective!)

HELPFUL HINT: Let the Word of God permeate you.  Your spirit will thank you.