Chapter 5–Too Many Doctors Spoil the Diagnosis

In November 2010 we returned to St. Louis University Hospital to see Dr. Bacon after Roger had his esophageal varicies banded.

Dr. Bacon said that Roger was doing fine.  He agreed that it was ok to band the varicies.

We asked about Roger’s MELD.  “It’s 10, and remember that when people reach the number 15 they get on the transplant list.  When they are at 25, they get transplanted if a liver is available.”

In late November we were back in the ER again.

I remember that Roger didn’t feel well at the big Thanksgiving Sunday dinner at Salem Baptist Church.  Each year the church provided a free Thanksgiving dinner for all of the bus kids and their parents.  As was the norm, Roger was in charge of getting things organized; this year it just seemed that he was overly stressed. 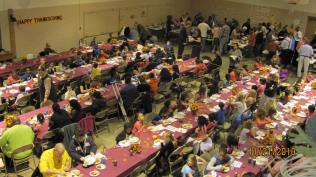 There is always a big crowd for Thanksgiving dinner.

This year it took a lot out of Roger.

Roger began to vomit on Monday after the Thanksgiving meal.  We were on the way to work on the apartments that we had recently purchased, and he kept on vomiting.  I turned around and took him back home.

He had called our primary care physician (I had wanted him to call the GI doctor, but he refused.)  I remember this being the first time Roger made no sense when he talked.  He didn’t know who the president was.* He was talking crazy, and it really scared me.  I got on the phone with the nurse, and she said to do nothing with the stomach for 3 hours to give it a rest.  Then if he vomited again, I should take him to the ER.

That was when I called Eva, Roger’s sister.  She worked as an ICU nurse for many years, and she was always our go-to person to get personal FREE medical advice. She said that dehydration could be the problem, but not the main one.  He shouldn’t vomit.  Not at all.  The banding or the varicies could rupture.

We immediately went to the ER, and after all of the tests, meds to settle his stomach and a 3-day stay, they determined that it was just a virus that hit him hard.

He had two more esophageal bandings, one set in December 2010, and another in May of 2011.

The GI doctor did a scheduled Upper GI endoscopy to see if more banding was needed.  He did 6 the first time and 4 the second time.  I asked him how often he needed to have this done.  The doc said, “These varicies are where there are weaknesses, and the pressure causes the bulging that could rupture.  As long as they see something bulging, we need to band.  The only way they can stop is to see if everything is scarred.  But we always have to periodically check.”

During those procedures I would find myself in a tiny waiting room.  There was room for only about 5 or 6 chairs, so if there were others in the waiting room, it was difficult to have a private conversation.  There I waited.  Sometimes with an anxious heart.  Sometimes reading a book during a routine test.  More often than not, people kept to themselves.  We were all lost in our thoughts, pondering the results, success, or the future of our loved ones’ lives.  But occasionally there were “talkers.”  People who wanted to engage in conversation, when you just wanted solitude.  Look for more about this in later chapters.

On May 22, 2011 we were replacing a window at the apartments, and Roger’s shoulder started to hurt.  It looked like poison ivy when we checked it.  It lasted for about a week, and as he shoulder pain worsened, he went to the doctor and was diagnosed with shingles.  Poor guy.  This lasted for about two weeks.

I don’t want to minimize his case of the shingles, but we were both glad it wasn’t worse.  Remember the video Lisa and I did for friend Kim?  It was so bad for her, for months she could hardly have anything touch the blisters

Roger was so fatigued.  He was tired, sleepy and fell asleep while he was driving.  Dozing off at church was an issue of its own.  I remember sitting next to him and giving him a jab with my elbow to wake him up.  After all, we sat in the front, and I was embarrassed that everyone would see the Assistant Pastor sleeping during the sermon.  This didn’t make him too happy!  And come to find out, it was because of the medicine he was on to prevent him from bleeding to death in his esophagus.

The doctor recommended a sleep study—just to rule out narcolepsy.  The found that he had mild sleep apnea.  But not enough to wear a mask.

In July 2011, one year before he would receive his transplant, we had another routine appointment with Dr. Bacon, the liver doctor. Here is the summary of that appointment.

TOO MANY DOCTORS SPOIL THE DIAGNOSIS

In August 2011 Roger developed a fever and cough. There was another visit to our primary care doctor and an x-ray.  “The chest x-ray showed that it was “grossly clear, costophrenic angles sharply defined, cardiac silhouette was borderline enlarged, negative for pneumonia.”  But after looking at Roger’s recent bloodwork, the primary care doctor wanted Roger to see a blood doctor.  He was concerned that the platelets were too low.

We got into the blood doctor in September, and she said everything looked good, except there were antibodies in his platelets.  She requested a bone marrow biopsy to check for ITP.  Idiopathic thrombocytopenic purpura (ITP) is a bleeding disorder in which the immune system destroys platelets, which are necessary for normal blood clotting. People with the disease have too few platelets in the blood.

The waiting room at the Cancer Center was ill-omened.  I looked around at the magazines, fish tank, mints, motivational posters, and comfort items, and I thought, “This is a little different from other waiting rooms.  People who come here have some sort of sentence on their lives.  Kill cells with chemotherapy, or you will die.  Take this medicine or you will die.  Follow our instructions or you will die.  And I’m sure many of them died anyway.  But I shook my head and thought, “This is just a test for Roger.  Surely he doesn’t have cancer.  He’s not one of ‘them.’”

While we waited to get an appointment for the biopsy, Roger noticed that he was retaining fluid.  A lot of it.  It got worse and worse, and on Monday morning, the day after our big anniversary service at church, he got in to see the nurse practitioner.  She put him on Lasix, and that seemed to help.  She said to contact the liver doctor in St. Louis.

Roger had the bone marrow biopsy, and it was pretty painful.  Well, it was actually really painful.  I was with him when they did it. The doctor let me sit in the small room and I watched Roger as he laid on the table and she performed the biopsy.  There I was–in another waiting room but I was alone—watching my husband go through another painful experience.  He said he didn’t remember much of the procedure except the “digging feeling” as they removed a big chip of bone! They did give him 2 units of versed, and it made him pretty groggy!  But I knew it was bad; I heard his groans.

We then had another appointment with Dr. Bacon in St. Louis.  He almost chuckled at the foolishness of the bone marrow biopsy.  Roger didn’t have any fluid in his belly.  He said that all cirrhosis patients with scar tissues have low platelets and an enlarged spleen.  It didn’t surprise him at all.  His platelets at 65 were where he expected them to be.  Dr. Bacon said, “If the cancer doctor wants to put you on prednisone, ask, ‘Do you really think this will help my liver?’”  He also said not to get his spleen removed.

Life.  We still had fun.  Even though Roger was tired, cold, in pain, and sleepy, he tried to have a good time.  We hosted a Weldy Family reunion and though he wasn’t in many pictures (he was probably working at church), he enjoyed the cousin fun.  We took an anniversary trip in October and it was a relaxing time. We had a Union Baptist Chapel reunion that involved food and horseshoes and renewed fellowship.

He was always so cold!

Christmas was a great family time. We opened presents on a Saturday morning after Christmas, because that’s when everyone could be there, and we kept the tradition of opening presents by “age,” with the youngest going first.  This year, however, Roger opened his first because he had to go to work at the church.

*Side note: Funny, but “Who’s the president?” would stump him many times four years later, but with a much more serious diagnosis.