As I write this blog about May 2015, the sixth month since becoming a widow, I am actually organizing these thoughts in February 2016.  There are many reasons I have avoided writing since my last post in December. If I am honest, the main one is that I have been overcome with grief, sadness and lack of motivation.  But that’s for a later blog entry.  For now, let it suffice to say that I had hip replacement surgery on December 23rd, and I was recovering.

Six months a widow, and I still found myself being sensitive to hearing sermons that dealt with marriage and family.  How could they apply to me?  I no longer had a marriage.  My kids were grown.  What could I possibly learn?

And then the thought struck me—maybe I should start receiving those thoughts as though God were my husband.  I determined to start doing that.

The first Sunday in May I listened to Pastor Derek’s sermon and searched for how I could receive the words and not be so consumed with the fact that I was not married.

Here are his points, and do you know what?  I found that I could apply them to the relationship I now had with God as my husband.

To have a great marriage you need:

I received a perfect GriefShare email.  There were many times I would think “sad” thoughts.  Often I tried to push them away, calling it suppression.  Healthy?  I’m not sure, but I wondered if that was how my mother coped without my dad.  I never heard her bemoan her widowship.  She was always positive.  I’m sure she missed him, but she didn’t dwell on the misery of grief.  I became determined not to succumb to grief, but accept it; I would grieve, but not wallow in it.

Keeping Your Mind on Jesus

Controlling your thoughts is one of the most difficult things to do. You probably find it easy to worry, to daydream, to let your imagination run wild, and to let unbidden thoughts creep in and take over. But, oh, the repercussions of this lack of control.

Then I came across an article on “Complicated Grief” and even saved it in its entirety.  I thought about sharing it here, but that would have been information overload.  Google it and see how many articles you find.  I thought that perhaps I was dealing with this type of grief, but no–my grief was not quite that unrelenting.  At least not yet.  That would come later. Here is a portion of the article by Jane Brody.  When Grief Won’t Relent

In a report last month in The New England Journal of Medicine, Dr. M. Katherine Shear presents a composite portrait of what is known as complicated grief, an extreme, unrelenting reaction to loss that persists for more than six months and can result in a serious risk to health. She describes a 68-year-old widow who continued to be seriously impaired by grief four years after her husband died. The woman slept on the couch because she could not bear to sleep in the bed she had shared with him. She found it too painful to engage in activities they used to do together. She no longer ate regular meals because preparing them was a too-distressing reminder of her loss. And she remained alternately angry with the medical staff who cared for him and with herself for not recognizing his illness earlier.

Symptoms of complicated grief commonly include intense yearning, longing or emotional pain; frequent preoccupying, intrusive thoughts and memories of the person lost; a feeling of disbelief or inability to accept the loss; and difficulty imagining a meaningful life without that person.

“People with complicated grief often feel shocked, stunned or emotionally numb, and they may become estranged from others because of the belief that happiness is inextricably tied to the person who died,” wrote Dr. Shear, of the Columbia University School of Social Work and College of Physicians and Surgeons.

“Complicated grief is like a wound that doesn’t heal and can follow the loss of any close relationship,” she said. The risk of complicated grief is greatest — 10 percent to 20 percent — among those who lose a romantic partner and even higher among those who lose a child. It is more common following a sudden or violent death and most common among women older than 60, she reported.

I loving seeing former students! Amanda was at the Mother-Daughter Banquet.

I spoke at a mother-daughter banquet in May.  It was my first opportunity to speak in a public setting since Roger had died.  I have always been quick to say yes if someone asks me to speak or share things from God’s Word.  And then when the time comes to speak, I always wonder, “Why did I say yes?”  It was no different this time.  I wondered what I could share that would encourage others—and keep from crying the entire time.  I shouldn’t have worried.  The ladies encouraged me, and I think we were all blessed.

For a long time my hips had been bothering me.  I finally went to the doctor and after x-rays he said, “You’ve had a shot, and if you got relief, I’m amazed.  You are bone on bone with spurs and cyst pockets.  Both hips are in end-stage osteoporosis, and you need them replaced.”  My response was flat—not shocked, not surprised—just flat. (Stay tuned for Dr. Sullivan’s remarks about my reaction when he visited me in the hospital after the surgery.)

The kids didn’t want me to be alone on this first Mother’s Day, so I spent the weekend with Scott and Jess.  I’m glad that I was with them! 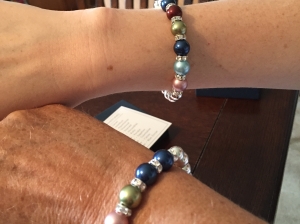 Budgeting.  Six months into this life, and I felt like I was doing ok.  I could live on my pension without getting into savings or investments.  I learned again that I could trust God when He nudged me to give or help someone.  Roger always had the gift of giving; I wanted to continue that.

Good friend Kathleen told me that as she was jogging through the cemetery she saw that Roger’s death date was inscribed on the tombstone.

I was struck with sadness, partly because I actually saw the death date the tombstone, but mostly because I knew that someday my end date would be on it, too.  I was mortal.  As Shakespeare said, “What fools these mortals be.” We think we will live forever on this earth.  No.  We will live somewhere forever, and I am trusting the One Who paid it all for me and purchased my forever heavenly place.

I had another “boy I sure miss him” moment.   I decided to wash the siding of the front porch, and when I finished, I put the lawn chairs back where Roger and I used to sit.  We never had much time to just “sit” during our lives, but when we did, it was so good.  And when he got the tumor, we did more of that.  Those were comfortable times in the midst of the unknown.

But some things were still uncomfortable.  I was coping ok with the bills, and I could even do the mowing.  But things like putting on weed killer was another story.  It was so easy when he was here to do it, help me, or tell me how to do it. Granted, I was more self-sufficient than I have ever been, but I still wanted and needed Roger’s “presence” in so many areas.

Then I remembered that my sufficiency was in God.

During a GriefShare class I was struck with this question:  Who am I?

About the Wedding Rings

I was out driving one day and thought about our wedding rings.  I was still wearing mine on my left hand.  Roger’s too.  I had done that when he was first hospitalized during the liver transplant. And now, since he was gone, I continued to wear them.  I wondered when I would take them off.  I couldn’t just yet.  In my mind I felt like they were keeping me safe—kind of like a shield for anyone who might pursue me.  Somewhere I read that I would know when it was time to take them off.

Memorial Day weekend came, and I didn’t put flowers on Roger’s grave.  I think it was because I knew he wasn’t really there. It was just his shell.  Anyway, my family rarely decorated graves; it just wasn’t a tradition with me.  Was I thoughtless?  Uncaring?  I don’t think so.  I wanted people to remember Roger the person—not just because there were flowers on his grave.

I did have some fun times in May, 2015. Traveling to Michigan for a piano recital and kindergarten graduation was a great get-away. Spending time at Chad’s was always nice, and the coffee and quiet on the front porch was needed.

In the room where I stay at Chad’s there is a clock. The second hand moved as you would expect, faithfully clicking off the seconds for every minute of the day. But the minute and hour hands never moved! Since December it had been 5:40. It was a poignant picture of my life: sometimes life passed with no chance of pausing or stopping the beat, marching on with a tick, tick, tick. Other times it feels like time had stopped, and I was held captive in a bad dream–and I couldn’t wake up.

Going to the recital.

Relaxing on the porch

On my way home I stopped by to see my great friends from high school, Marianne and Greg.  That was refreshing.

About Another New Widow

At the end of May another woman at church became a widow. Carol’s husband had been ill for a long time, but when Luther died it was just as sad and heart wrenching as when Roger died. Listening to her talk about the experience reminded me of the raw emotion when death calls. She spoke of holding Luther’s hand and touching Luther’s head. Yes. I did that to Roger, too. It had been just over 24 hours since Luther died; I vividly remembered my first 24 hours after Roger was gone.

About Another Brain Cancer Death

Joe Biden’s son died. Cause of death: brain tumor. “There will come a day—I promise you, and your parents as well—when the thought of your son or daughter, or your husband or wife, brings a smile to your lips before it brings a tear to your eye,” Biden said. “It will happen.”

That is so hard to believe.

Observation: Everyone eventually has some sort of health issue.

Observation: We are mortal.  All of us.

Observation: How many times can I state that friends and family are invaluable?

Helpful Hint:  Take care of your health needs.  It may be hard doing it alone, but you must do it.

Helpful Hint:  Prepare and prevent instead of repair and repent.  Plan your budget and live within it.

Helpful Hint:  Be willing to reach out to others who are hurting the same way you hurt.