After two of our sons married, we alternated celebrating Christmas on either Christmas or New Year’s. It has worked out well. My kids have great in-laws on the other side of the family. And this was the year to have Christmas on New Year’s.

It was so good to have Lance and Lisa during the days before and after Christmas. The rest of the kids arrived on New Year’s Eve, and it added a lot of noise and excitement. Ah, family. I found myself counting down the days until they would leave, and I would be alone. I knew in my heart that they had to leave; I knew that I would be OK—but I also knew that I would miss having someone in the house with me.

During the previous weeks I hadn’t cried too much. People were thinking of me with cards and calls. It was like I was living the quote from “Call the Midwife” by Jenny Worth. Lance had given me a copy for Christmas. I can’t remember who said it or what the setting was. Perhaps it was when a mother lost her child. But it was spot on.

“…and that I was remembered made my pain endurable.”

It was a New Year. We got up and opened gifts. There was lots of laughter. And wrapping paper. And presents. And kids. It was great.

Scott got the GI Joe jet he had long wished for. Chad got one as a child, and from then on, Scott wanted one, too. We found it on e-bay and you can see by the pictures that it was a hit. The photo was a perfect reenactment of Chad’s picture from 1984. There were lots of funny gifts that made us all laugh. 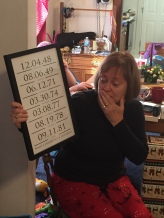 I got great gifts, but the one that put me over the edge with tears was the one from Scott and Jess. It was a framed picture of all of our birthdates, and our anniversary date. At the bottom were the words What a difference a day makes. I cried and cried. It was just so touching. I missed him so much that first Christmas with the kids. I missed the little goofy things he would do. We always joked that he would fall asleep by the time it was his turn to open gifts, so for the last few years we had been letting him open his presents first.

That day we did a lot of laughing. And it was good for our souls. Roger was still a very present entity…just not in the flesh. 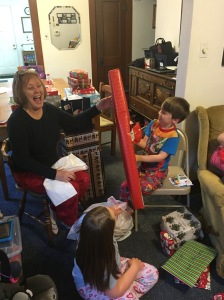 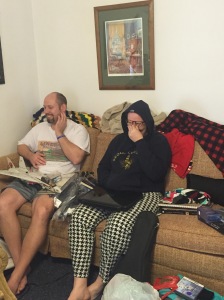 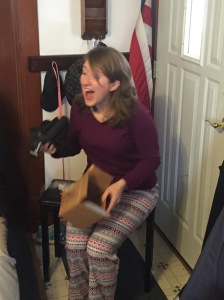 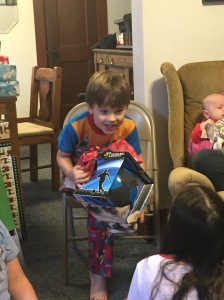 Chad, Lance and I went to the lawyer to see what needed to be done with the trust.

I would hear over and over that we all grieve in our own way. And it’s true. Lisa was struck by an overwhelming feeling of “aloneness.” She was pensive and quiet, and when I asked, she said, “I’m ok when I’m in Green Bay, removed from this house. But when I come back home here it all hits me. I remind myself that I may feel alone, but I’m never alone.”

My heart ached for her. We were strange partners going through this storm.  She had weathered being single longer than I; it had only been over a month for me.

We celebrated Asher’s birthday on January 1st by bowling. That was fun.

Part of the crew

Then we cleaned out a closet. I’m not sure why I reacted this way, but I remember feeling like I wanted EVERYTHING CLEANED OUT immediately. The kids did what they could, but held me in check, reminding me that it would be a long process.

We sat and talked. All of us. We talked about the future. I told them I would be fine staying at the house. I’d give it a year and see how it went.

The next day everyone was gone, except Lance. He took me to get my tire pumped up—I had chronic tire pressure problems. But he didn’t do it for me. He made ME do it. And he took me to Walmart to have them check it. And he made ME tell the people what was wrong. Yay me. And yay Lance for pushing me to do things on my own, since that would be my job as a new widow.

I finally slept in our queen bed for the first time since Roger died. Before the kids left, they helped me make the switch from the temporary twin bed to our “sleep number” bed. Which side did I sleep on? Roger’s side. It didn’t bother me. It was ok.

As I was getting ready for church I did what I have done many times in the past—but without Roger. I lost my contact lens.  He was always my helper in finding it if I dropped it.  I would go, “Oh no.” And he would say “What happened?”  And I would tell him I dropped my contact, and he would come to help me.

That morning I prayed, telling God that my earthly helper was not here and asked if He could help.  I looked and looked. Everywhere. I was beginning to think I would have to get an appointment to get another, when I looked down and saw it on the rug in the bathroom floor!  I was so thankful.

Church was good for me. The fellowship was good. The songs were good. Except the last verses. Don’t get me wrong. I love the hymns. But did you ever notice that the last verse of each song is about heaven? Yup. The tears flowed freely when we sang those verses.

For the next week I busied myself with needed tasks, and I felt very accomplished. AFLAC, Hospice, investment brokers, washing sheets—it all kept me engaged.

And then another “first” problem hit. It was one that I didn’t know how to handle. I’m sure that many of you think I should have been able to deal with it. But I am very naïve when it comes to mechanical things. Electrical things. Things that should work remotely. Like the garage door.

I had planned on going to Wednesday night prayer meeting.  I got ready, started the car, opened the garage door, backed out and couldn’t get the garage door down.  I fiddled with it, held the button down; it went down and then went right back up. So I called Scott and he gave me some suggestions. I tinkered and fiddled. No luck. So I called neighbor Ted. During Roger’s visitation Ted had told me EMPHATICALLY that he would do anything for me and wouldn’t charge me. That was his livelihood, but he wanted to help me. “Just call me,” he said, looking firmly into my eyes. So I did.

He came over and figured that it was the wiring on the sensors.  He said he would come the next day and check the cables, oil the hinges and fix the wires.

That next day I went out with my friend Whitney for coffee. We were chatting, and eventually Roger came into our conversation.  I teared up.  And I felt embarrassed. And then I remembered what the Grief Share email said:

Talk About It Day 40

Death is a part of life. Everyone experiences the death of a loved one.

“We are social beings, physical beings, and spiritual beings,” says Rev. Clay Evans. “When you lose someone you are attached to, it is normal, it is natural, for you to grieve.”

If grief is natural and is part of everyone’s life, why is there a feeling of discomfort when someone mentions the death of a loved one? Why the embarrassment when tears come during an ordinary conversation?

People in grief may avoid their friends and even their church to prevent these awkward moments. This is not how it should be. Someone needs to move beyond the discomfort. Be the first one to squelch the prevailing attitude of embarrassment and unease, and start talking about grief.

“Bear one another’s burdens, and thus fulfill the law of Christ” (Galatians 6:2 NASB).

Lord Jesus, grieving is as natural and as common as loving. I want to help make it as acceptable, too. May my healing journey spark healing in those around me. Amen.

And the garage?  Sure enough, when I got home after coffee, the garage door was PERFECT. It was just like a new door.

OBSERVATION:  Holidays are hard. No getting around that.

OBSERVATION:  Grieving people are more uncomfortable with their own tears than are those who listen while the “grievers” talk.

OBSERVATION:  Life goes on. And it goes on without your loved one.

HELPFUL HINT:  When people volunteer their help, be willing to ask for it. Don’t let pride get in your way of receiving a blessing. (I’ve had to tell myself that hundreds of times. It’s not easy for me to ask for help.)

HELPFUL HINT:  It’s OK to cry. It’s OK to tear up. It’s OK to be sad. (I’ve had to tell myself that hundreds of times. It’s not easy for me to cry in front of people.)

HELPFUL HINT:  Don’t panic. Stay calm if something is lost, broken, or difficult to handle. (I’ve had to tell myself that hundreds of times. It’s not easy to stay calm in a storm.)