Chapter 10 – When the Storm Gets You Down

When life gets you down…

Or, I guess, when a storm gets you down, at least tread water.

Lisa and her friend, Abby came home for a weekend in September. They did a little cleaning…well, a lot actually. We got rid of some drywall and trim. Roger knew that we were cleaning, and that was good. He didn’t say anything, but I still had the eerie feeling that he would be so upset when he went upstairs. But I kept hearing Chad’s voice in my mind, “Mom, he’s not ever going to be the same. We have to do this sometime.”

Roger had a hard time remembering things.  Well, that’s an understatement. Remember the “Dory” reference? Like her, he couldn’t remember a LOT of things.  One of those was the code to unlock his phone.  He would put in random numbers, get locked out, and ask what happened.  Lisa had a bright idea.  She wrote instructions, and then made it the lock screen photo, so when he tried to used the phone he would know what to do.

We eventually wised up and took the code off!

Another weekend Lisa came and stayed with Roger while I sang with State of Grace. Because she lives in Green Bay and teaches there, she had to leave on Sunday afternoon. That meant I had to find someone to stay with Roger from the time she left. Our good neighbor, Bill Fleming was willing, so he came. When it was time to go to church, he took Roger, and I met them there.

We completed  the 20th radiation treatment.

We listened to the radio as we journeyed to the Siteman Cancer Center. One of the broadcasts was about depression and discouragement, and I’ll not forget the illustration that was given.

One night at dinner a man, who had spent many summers in Maine, fascinated his companions by telling of his experiences in a little town named Flagstaff. The town was to be flooded, as part of a large lake for which a dam was being built. In the months before it was to be flooded, all improvements and repairs in the whole town were stopped. What was the use of painting a house if it were to be covered with water in six months? Why repair anything when the whole village was to be wiped out? So, week by week, the whole town became more and more bedraggled, more gone to seed, more woebegone. Then he added by way of explanation: “Where there is no faith in the future, there is no power in the present.”

One day at radiation we both laughed at something. A son was pushing his dad in a wheel chair out the door after treatment, and he banged right into the door. We heard it go clunk, and then the dad said, “Well, you’re 0 for 1.” We laughter and laughed. Me, because I have had that same problem in that same door. Roger, because he is sadistic.

Breakfast on a weekend home.

Roger was determined to organized the carts at Walmart.

He is satisfied now.

Throughout the month of September, Roger began sleeping more. He also started to say odd things.

Out of the blue he said that he had his gun out of the holster today. I asked why and he said because of the people coming around. He just wanted to be prepared. He wanted to know what I was typing and I told him. He said he was glad I wasn’t awake when he went outside and tried to fire it the gun.

He asked me where the cats was that were here to protect us from intruders. I said cats don’t protect. They run and hide. He said we had a cat once didn’t we? There was one here? I said Lisa had one. And it hid. He said we had a dog, too. I said that was a long time ago.

He came in and asked where the documentation was for the CD we made? Through questions, I found out he wanted to know the mechanical licenses where to the choir CD because he wanted to reproduce it again and sell it. 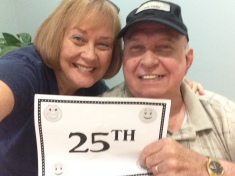 We completed the 25th radiation treatment.

I asked the doctor just what the radiation was supposed to do, and he said, “Contain, or possibly shrink the tumor. Roger will get an MRI in a month, and then every two months after that. The first may show swelling. That is typical. That’s why he has an MRI every two months.

My gut feeling was that the MRIs would be the thing to show us the progression of the tumor.

Our continual source of strength through this whole journey was God.  Prayers of the saints actually helped me feel like I could go on.  They were the encouragers, like Dory, who spiritually whispered, “Just keep swimming; just keep swimming.”

4 Responses to Chapter 10 – When the Storm Gets You Down