Chapter 2 – Fear in the Storm

What frightens you?  The sound of thunder can send a chill down to the very marrow of your bones, splitting asunder your usually calm exterior and leaving you trembling, afraid, and in need of flight. (from http://www.wikihow.com/Face-Your-Fear-of-Thunderstorms)

I pondered our appointment with Roger’s primary care doctor, and I was still unsettled, wondering just what was going on with Roger’s mind.  But we continued with our newly retired life, keeping our scheduled appointments.  I had signed up to give blood on July 15th. Roger had an appointment with his foot doctor in Springfield, and we were going to go our separate ways.  At noon Roger told me that he didn’t feel too well, and I said that I would cancel the blood donation and go with him.  I got in the shower, and the next thing I heard was, “I’m heading to Springfield.  I’ll see you later.”

Well, I didn’t think too much of it and gave my blood donation at the Red Cross. After I was done, I called Roger to see how he was doing, and the call went to his voice mail.   I drove home and tried to call him again.  Still no answer.  By 4:00 I was concerned and decided to use the “find-a-phone” app. You can imagine my shock when I found his phone “pinging” 30 miles from home on the Sangamon River Bridge.

I jumped into the car, speeding, praying and crying, begging God to let me find him ok.  I imagined him actually in the Sangamon River as the result of some accident.  Twenty minutes later I was relieved to find the car on the bridge heading west and Roger sitting in it.  I pulled up, got out of the car, and checked to see if he was ok. I remember telling him how worried I was about him, and I remember that he couldn’t tell me how he got there.  He had vomited but didn’t seem sick.  He didn’t even know what day it was. The car’s two right tires were flat—shredded to pieces. 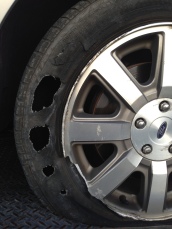 I called AAA, and they sent a tow truck to take the vehicle back to Decatur.  During our wait, I tried to piece together the puzzle of how he arrived on the bridge facing west when his appointment was even further west at 1:00 pm.  I eventually used the clues on fast food receipts to find that he traveled 15 miles beyond the doctor, turned around and traveled another 30 miles north, and then turned south for another 20 miles to travel west.  I don’t think we will ever find out how he damaged the car.  At that point I was just grateful that he was alive and well.  I just didn’t realize how sick he really was.

The next day I called our primary care doctor and explained what had happened with the car and his memory.  She suggested that we go to the ER immediately, so we did.  Roger was asked the question that he would hear so many times during the next few weeks:  “What brought you to the hospital, Mr. Weldy?”  His standard reply: “I don’t know.  My wife thinks there is something wrong with my mind or that I am crazy.  I feel great.”  He had a CT scan and an MRI that evening, and the ER doctor said that there could be a possible tumor on the brain.  He wasn’t sure, and he made an appointment with a local neurologist for a better opinion.

When all of this began, I’ll admit I was afraid.  Afraid that Roger had beginning stages of Alzheimer’s.  This sounds horrible, I know, but I was actually relieved when that was not the diagnosis.  I told myself that I didn’t want him to have a brain tumor, but I just didn’t think I could handle a slow agonizing death with Alzheimer’s. I was willing to accept it, but my flesh was sure having a pity party thinking, “Oh, great.  We just retired and now I have ten long years of taking care of my husband as he faces a slow and agonizing death.”  It was hard to know how to pray.  I guess it was then in my heart that I prayed for mercy. Hebrews 14:6  Let us therefore come boldly until the throne of grace, that we may obtain mercy, and find grace to help in time of need.

So we are back where this blog started:  I finally stopped driving around on July 18th, trying to avoid the inevitable, and we met with the neurologist.  He showed us the MRI and explained that Roger’s frontal lobe was impacted :  there was lots of light gray where it should be dark.  The mass was embedded throughout the brain, not centralized, but mainly in the right frontal lobe.  The doctor looked at me and said, “Roger shouldn’t drive.  And remember, Roger doesn’t know that he doesn’t know he is sick.”  In the back of my mind I logged the doctor’s opinion:  “Sometimes this happens with transplant patients who are on anti-rejection medicine.”

Our transplant coordinator called and said to go to Barnes-Jewish ER, and tell them that Roger had sudden onset acute mental state confusion. We were to make sure that they knew he was a liver transplant recipient and that renal doctors were also dealing with his kidneys.

I rented a car (you’ll remember that ours was being repaired because of the shredded tires) and we journeyed to Barnes.  We spent eight hours (from 4:00 – midnight) in the ER.  It seemed long, but they did their best to run necessary preliminary tests.  Our son, Scott, who lives in the St. Louis area met us there and sat through many tests and screenings performed on Roger.  We actually heard so many “neuro” screenings that we became proficient on asking the questions ourselves, contemplating becoming neurologists in our spare time!