A wedding.  Another one.  I played the piano for this one.  The ceremony was great.  Not many tears on my part.  I was just concerned with not making any mistakes.

I sat next to friend Rachel at the reception, and we both decided to go for the bride’s bouquet.  There was even a plan to fight each other over it.  I could see the headlines.

It would have been such a great photo op.  But alas.  It didn’t happen.  There was no bouquet throwing.

The next Sunday night I was invited out to Culvers after church.  It was so good to be out with friends on a nice evening.  You can see by the picture that I was happy.

The second anniversary of my wedding anniversary without Roger.  We would have been celebrating 45 years.  State of Grace had concerts that day, and it took away a little of the pain—but the hurt was still there.  I had never felt angry at God, or bitter, for that matter.  But there was just a wee bit of regret that we didn’t even make it to 45 years, let alone 50.  Maybe regret wasn’t the word to use.  That implied that I had something to do with Roger’s death.  Honestly, it was probably pride.  Others had made it to those amazing anniversaries.  Why did I get cheated?  Surely I deserved more years.

Then I remembered to focus on what I had.  There were others who didn’t have long marriages.  I was truly thankful for the time I had with Roger.

And then I focused on a friend.  I agonized with Tina and her loss of her son. I couldn’t imagine living with that kind of pain. I didn’t have many answers for her.  I couldn’t tell her why God would allow that in her life.  All I could say was that she could still trust God, as hard as it was.  I shared my doubts, and told her of how I was slowly coming out of the time of gloom.  And I cried with her.

Many days I thought of the sign of Stephanie’s kitchen wall:

Out of the blue two people, unrelated, and geographically apart asked me similar questions.

Her–Would it be inappropriate for me to ask you if you are dating or would consider dating?

Me–No, it wouldn’t.  I had been talking about that to others.  I had told them I didn’t think I wanted a serious relationship.  At this point I am needing someone to meet my needs.  Someone to help me.  That would be a selfish relationship.  I don’t think I’m ready to help and invest and love someone else selflessly.

And then I got a text from another friend. She had just read the chapter where I told about taking off my rings.

Her–So I have a question for you.  You took your rings off because you are no longer married.  So, are you available now?

Me–Funny, I was just talking to someone about that.  I guess I would be available to date, but the thought of me getting in a car with a man who wasn’t my husband is far from reality.

My short answer:  I don’t know.  I guess anyone who would ask me out would have to be approved by the men and women of State of Grace.

And right now I can only see how someone could help me with things around the house.  That’s not very loving.  I can’t see myself wanting to be a helpmate.  God would sure have to change my heart on that.

Her–Glenda, you got married so many years ago, and it is so different now.  It would be a total change for you.

Me–Ha. That’s true.  So maybe I shall just stay a widow.

Her–Take your time for sure and date within your mindset for sure.  There will never be another Roger.  So you can start there.

I missed being held.  I became keenly aware when husbands would put their arms around their wives while sitting in church.  I saw couples walking and remember how Roger would walk next to me with his arm around my waist and his hand on my hip.  I really missed that.

And I wasn’t alone.  I was a member of a Facebook group that focused on coping after a glioblastoma death. And many widows commented on a thread that echoed this statement:  Widows missed being held.

The month ended with a trip to stay with Jessica while Scott and Ava had gone to the Wilds Camp in North Carolina.  I wanted to be a help to her by baking, cleaning, etc. but it turned out that I just kept her company.  It was good for both of us. 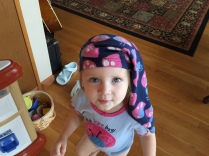 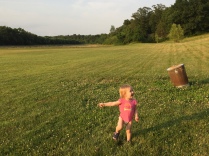 Grief was still so complicated.  Life went well.  And suddenly I was blindsided by the pain of panic, loneliness or isolation.  Yes, like this graphic, it was a tangled mess.

OBSERVATION:  There is always someone going through a more violent storm than you.

OBSERVATION:  You can’t catch the bouquet if it isn’t thrown.

HELPFUL HINTS:  Be wise in relationships.  “Don’t jump too quickly” is still good advice, even if you are into your second year of widowhood.

HELPFUL HINTS:  Don’t be sucked in to the “I’ve been cheated” mentality.  It does no good.  It will make you bitter.  And no one will want to be around you.