Chapter 19–Cleaning and Having Fun

I didn’t have many notes recorded for Chapter 18.  My journal notes are even sketchier for this next chapter.

Spoiler alert:  Here they are

This thought began to make an appearance frequently in my mind:

It would be nice for a man to help me and love me and take care of me.

That didn’t mean I wanted to invest in a relationship. I didn’t want to be a help to someone.  I just wanted a one-sided relationship.  One of getting, not giving.

But that wasn’t a good foundation for a relationship.  Even a good friendship consists of two giving people who are willing to sacrifice for each other.  How could I even think of a relationship with a man if I wasn’t willing to give?

So I decided that it wasn’t time yet.  Not time to enter into a relationship with a man.

That kidney stone couldn’t just let things be.  I was at Scott and Jessica’s helping out watch the children while they had an appointment and suddenly I was nauseated and had excruciating pain. Everyone kind of panicked, myself included, and we even tried to find an Urgent Care to get some relief.  Things subsided enough for me to travel back home, and as soon as I could, I made an appointment with a recommended urologist.

After showing me the CT scan from my ER visit, he explained where the stone was, how far it had to move and what I could expect.

He explained very clearly what my options were.  Yes, I would probably pass the stone.  Yes, I might have some pain.  Yes, every time it moves, it causes pain. Yes, if I couldn’t pass it, he could surgically remove it.  Yes, drink liquids, but it doesn’t have to be just water. Yes, if I passed it, save it and bring it in. (Yes, to what you are thinking.  “Use a strainer every time so the stone could be caught.”)

My son Lance, the Children’s Literature Professor, was on a sabbatical leave for the spring semester of 2016, so he had planned to come and stay with me for about a month to help me go through some of Roger’s things.

On a lark while we were chatting on the phone, I had mentioned that if I purchased tickets to a Fab Four concert, would he go with me, even though he might be the youngest one there?  Absolutely!  And then I remarked how I had never gone to a concert like that, and I was really taking a risk to go out of my comfort zone.  (Yes, another “first” to add to my list of new things I have done as a widow.)

And then I said, “What I would really like to do is go to a Barry Manilow concert.  Daddy and I had always wanted to do that, and now it’s not possible.”

Ten minutes after we hung up, he called back and said, “Mom. Guess what?  You had wanted to take me to see Lisa in Green Bay, and guess who is singing in his final tour—in GREEN BAY?  Barry Manilow.” 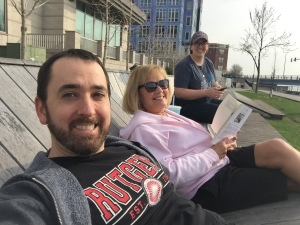 Chillin by the river 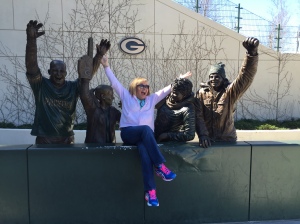 Trying to be a Green Bay fan

To make a long story short, we got the tickets, traveled to Lisa’s in Green Bay and had an absolutely wonderful time listening to Barry live, singing so many of his familiar songs.  One that meant so much to me with Roger being gone was this one.  Can’t Smile Without You 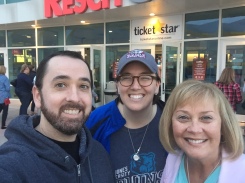 Headed inside the Resch Center

He opened for Barry 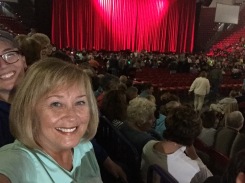 People start filling in the seat. 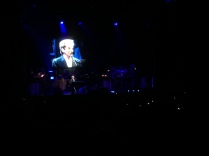 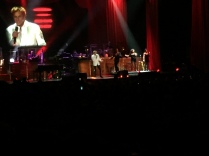 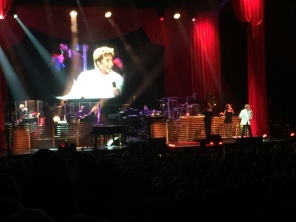 The audio-video was amazing.

With our glow sticks 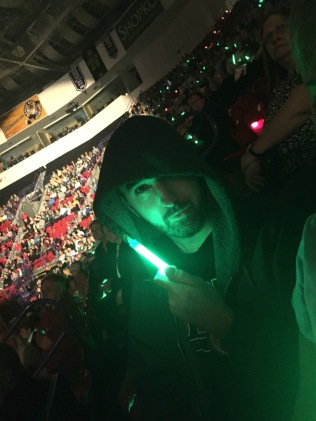 He actually sang with a younger version of himself.

And the greatest happening of all was that I passed the kidney stone while we were staying at Lisa’s.

TMI?  Sorry.  I sensed such an accomplishment in doing something that required no effort on my part.  When I took the stone to the urologist, I felt like they should have given me a trophy or something!

There are people who come across your path in life, and you often take them for granted.  You think that they will always be around, the same as you remember them.  While he was home, Lance and I were able to have lunch with some of those friends.  In our minds eye, they were still the same, but reality jolted us to 2016.  But they were the same in many aspects, and that was what made the meal fun.

Thanks Barb, Don, Helen, Carl and Kari for being in our lives. 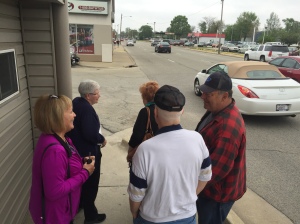 I think one of the most difficult things to decide when a loved one dies is when to go through their things.  I didn’t take too long to get rid of his clothes.  My logic was that no one was using his suits and dress shirts in my house.  If I passed them on, I could be a blessing to someone else.

First, he was a preacher.  And preachers collect things.  Everything.  And they write notes.  On many little scraps of paper.  And they have sermons.  And books.  And magazines.  And illustrations.  And notes.

Second, he was thrifty.  He saved everything.  Roger would keep things “just in case he might need them.”  Often I had to eat my words when he found something I needed!

Third, he kept things where he knew he could find them.  And that was in random places.  I would always rue the day if I moved something he was looking for.

So you can picture what his office looked like.

I knew I didn’t want to just pitch things.  My kids might want to have some of his things.  But I also knew that there were many miscellaneous items that had no value to anyone.

Lance and I dug in and pretty much looked at every piece of paper.  We scanned items, sent photos to the kids, checked and double checked things we handled, and categorized many things as “save for kids,” “save for me,” or “get rid of.”

I entered about 1,000 of his books into a database so that the kids could easily see what books Roger had and what ones they would like to have.

The result was one of relief and accomplishment.  Lance and Lisa are my “keepers and savers” of the family, the others, not so much.  If I thought I might get rid of something, they were, “Oh Mom, I’ll take it.  You can’t get rid of that.”

And treasures.  We found so many treasures. We tackled the attic which had many kids’ keepsakes, books, taxes, and my old bulletin boards.

Here I was, a year and a half after Roger died, and going through his things. It was the right time. And I didn’t have to do it by myself.  There was still more to go through–I hadn’t touched any of his sermons or word studies.  But there was still time.

Working on the attic 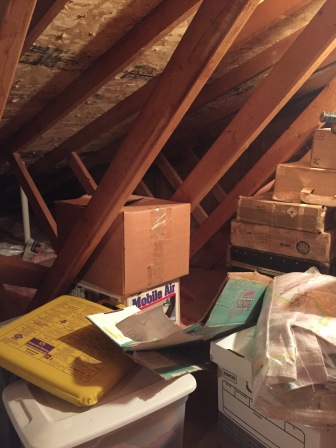 We cleared it all out 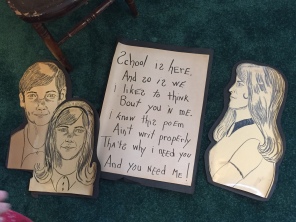 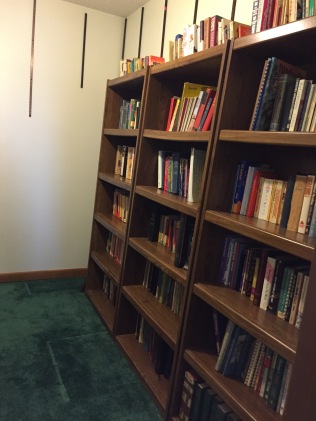 Some of the organized books

Lance going through so many files

Then there was the Fab Four Concert.

It was “fab”ulous.  If they are ever in your area I would recommend your going to see them.  They were authentic even down to Paul McCartney playing the guitar with his left hand.  And Lance was not the youngest person there.  The group played to a cross-generational crowd.

Ready for it to start

OBSERVATION:  It’s ok to have fun.

HELPFUL HINT:  Have someone help you go through your loved one’s things.  Even family members have a better perspective than you.  And take your time.  Don’t rush.  You might regret it.

HELPFUL HINT:  Have fun.  When you are into your second year of grieving, you need to have some fun.  Better yet.  Do something fun that is out of your comfort zone.