He was everywhere.  Some memories brought me tears.  And sometimes I felt awkward about it.  Like in year “1,” I was back in the mode of not wanting to cry, and not wanting others to see me cry.  But I couldn’t hide it.  He was still everywhere.

As those memories connected in my mind, they became a comfort–a comfort because I still remembered.  You couldn’t erase 43 years with a death.  The connections lived on.

Good friend Kari was always cooking up something for me.  She is one of the people who let my kids tolerate me living alone.  Kari checked on me, made sure I had enough to eat, entertained me, and surprised me.

One afternoon in August she came close to blindfolding me.

Earlier that week she had said that she wanted to take me somewhere, but it was a surprise.  She even picked out what I was to wear.

She threatened a blindfold, but relented when I promised I would keep my head down and eyes closed as she and Kadence wound around town.  Imagine what I looked like, climbing down from her truck, eyes closed, stumbling as I held Kadence’s hand as I entered the church’s fellowship hall, hearing many friends yell, “Happy Birthday!”

Here we go, I knew not where.

Friends at the party

Carol had her grandkids from Arkansas. 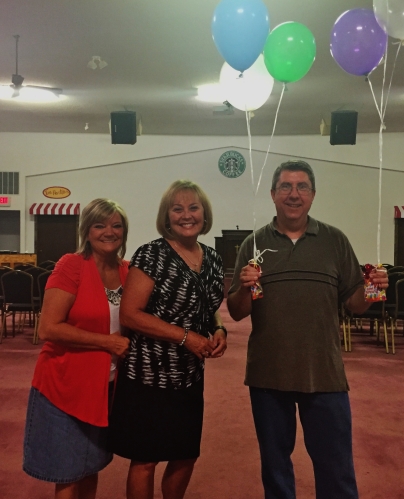 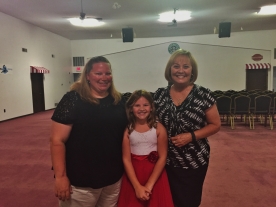 Kari and Kadence masterminded this party!

Blowing out the candles,

Kadence was so cute!

It was only after I got back home that I realized how much it meant to me to be with friends on my second birthday without Roger.

I enjoyed a nice meal with good friend Kathleen. 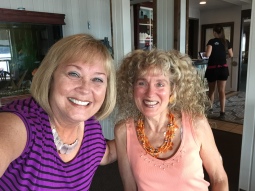 And my kids sent me great gifts. 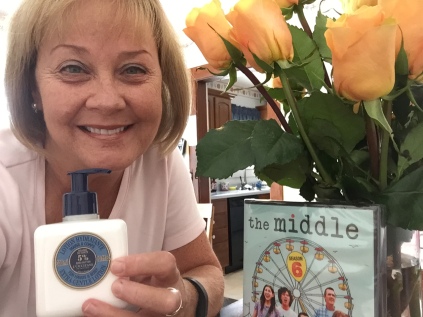 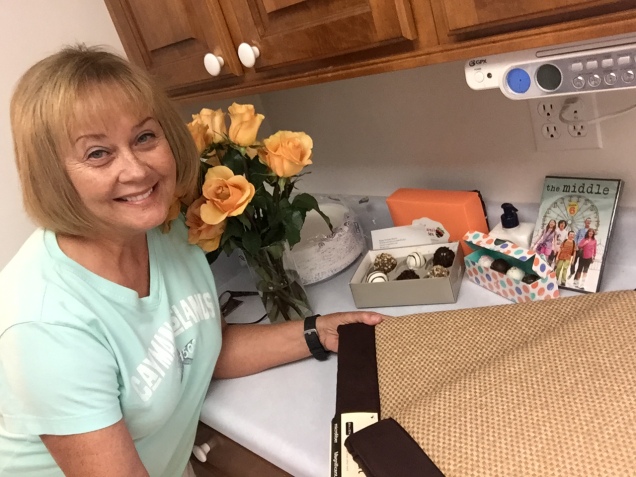 A good birthday made me feel like I was finally making progress with life.

Tom and me at one of our concerts.

Good friend Gary’s brother was near death. Years of smoking took a toll on his body.  Cancer invaded Tom’s lungs, and once he was diagnosed, he didn’t have very long on the earth.

We all loved Tom.  He was sort of a free spirit, independent, easy-going guy.   His death journey was made a little easier for us because two years before Gary had led him to the Lord.

One Sunday afternoon, Della, Mike and I visited Tom in ICU and sat with the family in the waiting room.

As you can imagine, many memories flooded my mind.  And I made comparisons.

I won’t forget a statement Gary made to people who were already grieving for Tom.  “There’s a lot worse things than death.”  How true.

For years Roger had tried to teach me how men were wired differently from women.  But I had a hard time understanding that men were always looking around, always checking things out, always scoping their surroundings.

Me?  I was always pretty much oblivious of what was going on.  Maybe it was because my mother taught me that everyone was watching me.  She would say, “Be careful what you do.  Everyone is watching you.”  So I didn’t care about looking at others.  I tried to act right and speak appropriately–even though I never was entirely successful at it.

But 21 months after Roger had died, part of me had become a man.  Not the way you are thinking.  But in the way I saw things. My antennae were up, getting signals that couples were around.  Old.  Young.  Middle aged.  Other times I sensed that men were near.  Good looking.  My age.  I found myself checking to see if they had wedding rings on, wondering where they were in life.  But I refrained from making eye contact.  That was just something I couldn’t do.  It made me feel like the aggressor, and I had always been the one who was pursued.  Part of me now wanted to be chased.

OBSERVATION:  When little things accumulate, they can become a big thing.

OBSERVATION:  You are not alone in your grief.  Others are dealing with death, too.

HELPFUL HINT:  Hang on to those “little things;” Eventually they won’t be painful.