Chapter 16–Over the Edge

Sometimes it’s not just one thing that sends you over the edge.

I look back at January 2016 and wonder why I was so sad.  I felt like was sinking further and further into a black pond—a murky mess that was filled with quicksand.  But now, six months later as I write this, I could give you a grocery list of reasons why.  A long list.

I was depressed.  Maybe even clinically depressed.  I’m not a certified counselor, but from everything I’ve read, I had all of the symptoms.

Because I needed to stay with someone after my 2nd hip replacement in December, and Chad and Stephanie needed someone to hold down the fort at their house while they were on a trip, it made sense that I stay there, recuperate and be the “adult” who managed the kids.

Lance was beginning his semester sabbatical at Francis Marion University, so he was free to drive me to meet Stephanie halfway before he went back to South Carolina.  It was a pretty good trip, though I was still kind of loopy from the pain meds. 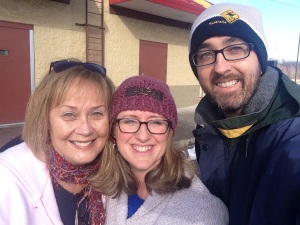 Transferring me from Lance to Steph

Yup, I was out of it that last leg of the trip 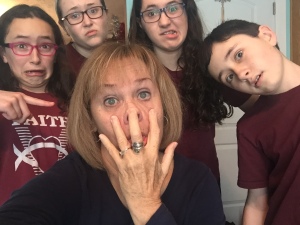 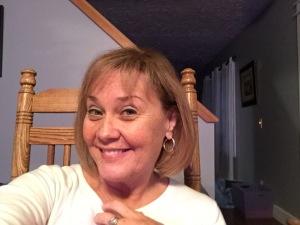 Sitting in the rocking chair 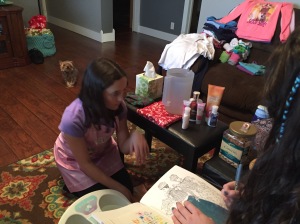 Waiting on my foot spa 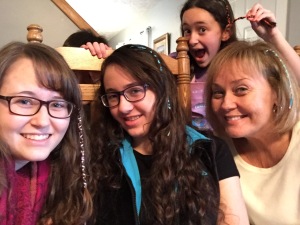 Putting extensions in our hair

And a UTI became my best friend.  I was plagued with a horrible infection.  Horrible.  I even took a broad-based antibiotic that Stephanie hadn’t needed to use.  A doctor had given it to her for a potential infection.  It helped, but it didn’t knock out the infection. I wasn’t physically well, either.

Chad and Stephanie returned from their trip, and I stayed for another week. Steph and I made freezer meals.  We laughed.  We went out for coffee.  I really tried to be happy and act like my usual self.  But when I look at those pictures, I recall that while I was smiling, I was weeping inside.

Out and about with Steph 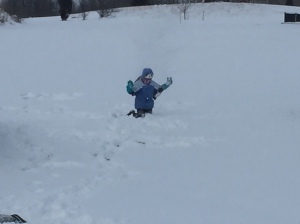 My mug of coffee

It was good to have Chad and Steph back. 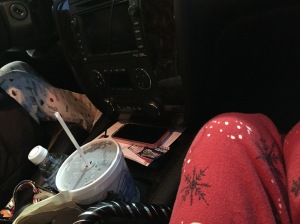 Taking the kids to school in our jammies

This was to show the lady way in the back looking so closely at her paper-or sleeping.

It was time to return home.  Since I had no car and couldn’t drive anyway, I had arranged for good friends Helen, Carl and Kari to meet Stephanie and me half-way.  They brought me the rest of the way home.  I was so thankful for good friends. 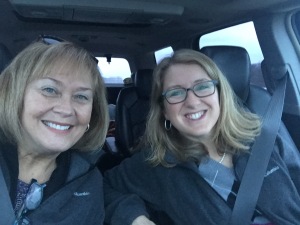 Taking me to meet the Davids 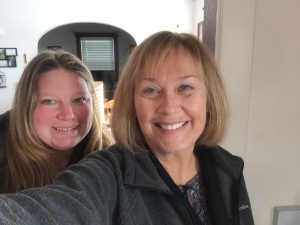 Eventually I started driving, and the depression grew.  Every experience had a reference to Roger.

I called the doctor and explained my UTI symptoms, and after a urine test, she called and said that the infection was “off the charts.”  It made me feel better to know that I wasn’t nuts—I really was sick.  I got a specific antibiotic, and it made a huge improvement.

I started putting together jigsaw puzzles.  They were a small diversion, and I guess they kept my mind active and focused on something else besides poor me, but it was a temporary fix.

First one (I did find the missing piece) 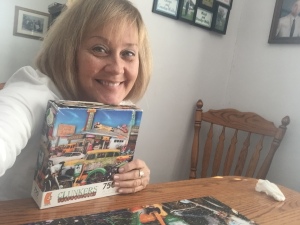 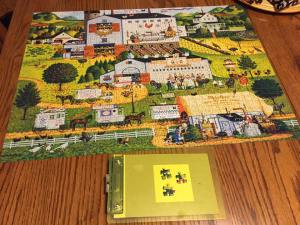 Second one with extra pieces?

One night at the end of the month I laid in bed at about 1:00 AM and just thought about dying.  I didn’t think I would ever really kill myself, but I did think of how I would be at rest and not have to struggle with being alone.  So very alone.

I knew that people cared for me, and they wanted to do things for me.  But Roger could not be replaced.  I always had to go home to an empty house.

I thought:  This is the 2nd year.  WHY?  Why was I feeling worse than I did last year?

I called my good friend Lisa in Alabama to wish her a happy birthday.  She asked how I was doing, and I shared that I was really down.  Every single thought I had was connected somehow to Roger.  She said that it was only natural to be that way.  43 years. “You spend that much of your life with someone…there has to be an impact.”

I was so sad.  I couldn’t even sing the second verses and chorus of Great is Thy Faithfulness.  I have always believed that I should have confidence in the words to songs I sang. They should mean something to me, and I should be able to live them before others and God.

Strength for today and bright hope for tomorrow,

Blessings all mine, with ten thousand beside.

What bright hope did I have?

But I sat in the service.  And I’m glad that I did.  It was the beginning of climbing out of the black hole.

I woke up the next morning and felt physically better. I could walk without a limp.  And I told Della, my dear friend who had helped me through the initial shock of Roger’s death, that I needed some friend time.  I headed her way in the afternoon.

We went out to eat, and I confessed that I wasn’t doing well.  At all.  But I didn’t want to talk about it then.  Later.

We watched the movie War Room, and it was moving.  I pondered my prayer life.  I thought about my life period.  It was a mess.

The next morning after we listened to J. Vernon McGee, I told her what was going on.  Things were TERRIBLE.  We cried.  And talked.  And cried.  And talked.  And I felt loved.  She didn’t tell me what to do.  She didn’t give standard clichés.  She just said she was thankful that I was her friend and that somehow, sometime I would be OK.  We prayed.  There is something to be said about crying and praying with a friend.  It draws you close to each other.

Me with Della, my friend, on that pivotal visit late in January 2016

We went for a walk in the park, and it was refreshing.  It was slow going, but I completed a mile.

This is the part you may not understand.  I can’t point to a specific “lightning bolt” experience.  No BOOM from heaven.  But as I drove home that afternoon, I knew I would be OK.  I knew that God would bring me through this.  Not around it.  But through it.

It was His Spirit comforting me.  While you may not believe me, it was very real to me. You can’t dispute my experience.

It was Saturday morning, and I actually cleaned the house.  I felt like doing it.  I actually did.  I listened to Pandora radio, and music, as it always is, was timely.  The first song was by The Perrys called “I’m Thankful.”  It was new to me, but it was just what I needed.

Then my scripture reading in the morning was 1st Corinthians 7. There was a portion that Paul

discussed marriage.  Something about if your husband dies, stay that way—unmarried.  That was poignant to me.   In the afternoon I picked up a book Kathy had given me a while back by Elisabeth Elliot titled Loneliness. I wish I had started it sooner.  It was so fitting and so perfect—I couldn’t put it down.

Someone also had shared this article about doubt.

If I Believe, Why Do I Doubt?

I had talked with Lance and shared about some of what I was going through.  I told him how I thought I should be doing much better, but I wasn’t.  He said, “Mama, there is no shelf life or expiration date to grief.”

I told him about the Facebook groups that I was part of (Glioblastoma and The Next Step: Coping after GBM loss) and how posts would appear about people just getting diagnosed or about how people were coping with the death of their loved one—even years ago—and it just made me sick.  I was drawn to it for help, but it depressed me the more.  Some were having great results and living a long time after diagnosis; many were dying just like Roger–soon after diagnosis.

Lance said that it was interesting how even what was supposed to be therapeutic opened the wound again and again.  It was a conundrum:  I didn’t want to forget what had happened. But I didn’t want to remember either.

Remember that grocery list of the circumstance that converged to put me over the edge?  Here it is.  It doesn’t look so long, does it?  But back then it seemed endless to me.

That’s what reviewing your past does.  It puts things in perspective.  Let your past make you better, not bitter.

I have come out on the other side of the Brainstorm and the Heartstorm.  My next journal entries are rather lean; I’m not sure they would make interesting reading.  There are fewer tears, not much pathos, and so much more hum-drum of daily life.  Though a widow’s life still brings many changes and challenges, I feel like my days have evened out.

Thank you for joining me on this journey.  I have been encouraged by many of your responses.  If I have helped one man or woman “get through” the storm, my purpose has been accomplished.

OBSERVATION:  “Grief is an emotion that has no shelf-life.” (L. Weldy)

OBSERVATION:  No one grieves exactly like anyone else.  It comes in different shapes, sizes, times and lengths.

HELPFUL HINT:  Hang in there.  This too shall pass.