Chapter 5–Better Days with the Help of Friends

February.  I’m three months a widow.  I still hurt, but amazingly with the help of friends, I have more good days than bad.

It was just another reminder of death. Blech. I was having a pretty good day, working with my friend Della, making phone calls and organizing things for our Southern Gospel Trio “State of Grace.” I went into Walmart to buy a new phone. We had purchased our iPhones two years ago, and mine really needed to be upgraded. The conversation:

Knowing it would come up eventually, I mentioned that my husband had recently died, and I thought the phone account was in his name

So, I went home, knowing that I would have to have the death certificate and other information for them tomorrow.

As I traveled home, I cried.  I’m not pretty when I cry.  I cried anyway.

Just another reminder that he is gone and not coming back.

My good friend, Kathleen, had invited me to attend a 13-week series of GriefShare meetings at a local church. The group was small, and I found that it was just what I needed. We simply watched a video and discussed things when comfortable in doing so. In the next few months I learned that this group would help me get through some dark times.

Della. What can I say about this friend? She was an angel. Sometime at the end of January she asked if I would like to come and spend the night at her house. That way we could work on sending out introductory cards to churches about booking State of Grace, organize our inventory of CDs and T-shirts, and have fun at the same time.

What she really wanted was to help me get out of the house and not be alone. I think if I would have asked, she would have let me stay there three or four days a week!

She will never know what a blessing this was. And the good thing is she wasn’t pushy. She didn’t keep hounding me. She was the kind of friend who would understand if I said I didn’t want to come.

Well, I went. I wasn’t alone. And it gave me something to look forward to.

Those weekly “spend the night with me, and watch The Music City Show, and eat steak” visits were a soothing salve to my soul.

The morning after that first night, I was reading my Bible and texting the kids about how I had rearranged the piano room at our house. I was looking for pictures to send to Lisa about a bookcase that I wanted to get rid of, and I found some. And I found Roger in them. And it made me cry. I guess that’s what getting “blindsided by grief” is. Then Della woke up and we both cried. There is something about crying with a friend that knits hearts together.

I found myself trying to avoid thinking of hard stuff, like Roger lying in the casket, him being gone, him being not himself, him being DEAD. I would get a thought, and then I would suppress it. It was as though if I fed those thoughts, it would be so much worse.

I still had the feeling of—it’s hard to put into words. It’s like I was on the verge of a panic attack, like I couldn’t breathe. It was like there was a piece of my heart missing. Hard to explain, because I knew I still had an entire heart. It was an invisible part of me that was missing; someone I was aching dearly for.

On February 8, 2015 good friend Autumn posted this on Facebook.

Today’s sermon was in I Peter. I got a special blessing when I turned there and found sermon notes from one of Brother Weldy’s last messages. The date was 5-14-14. 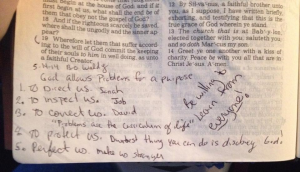 Autumn, you inspired me to look at my church notes. I did not have anything on 5-14. It must have been a Wed night and I was working. BUT, I do have 6-22-14, Sunday morning from Bro. Weldy. (Note: that was his last sermon.)

Here is the quote of the day “I want to wear sandals and paint my toenails red…. pray for me”… For those who know his story, after his liver transplant, he said many things a woman would say. The joke is that he received a female liver.

I had a dream about Roger.  I was on some sort of mission or journey to help someone, and I found myself in a house with hospice people.  All of a sudden Roger was there, and he was in the dining area, standing up and urinating…..making a big puddle on the floor. My first reaction was, “Oh no.  I threw away all of his underwear.  What am I going to do?”

It was symbolic on so many levels.  🙂

By mid-February, I was able to have an entire week that was good. The nights were not as bad, even though it was still quiet. I had places to go on some nights, and being busy helped.

Plus, I decided to get the cable. In an effort to save money for retirement, Roger had cut the cable cords several years back. We survived, but I really needed noise in the house. Interesting noise. The cable did that. There was more daylight, too.

Hard as this may seem, I had never had my nails done professionally at a salon. Never. Della, in her effort to take care of the grieving widow, made a lunchdate with good friend Carol and me, and it included doing something fun. Yup. There’s a first time for everything. I “got my nails done.” And, I think I got what I asked for even with the language barrier and all. It was fun. 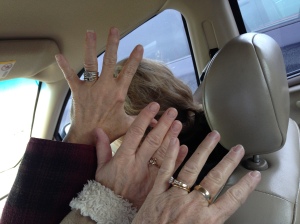 But wait!  There is more! I went tanning! All of a sudden one of them said, “Let’s go tanning!”  Yikes!  Never, ever had I tanned, unless it was at the beach or on the sun deck at Bob Jones. I’m also very claustrophobic. Pulling that lid down on me made me feel like I was going to join Roger via a casket to heaven. And I don’t think I got seven minutes worth because I was fiddling with the buttons so much. But at least I did it! (I did sign up and found that a regular visit to the tanning salon brought some cheer and light to me.) 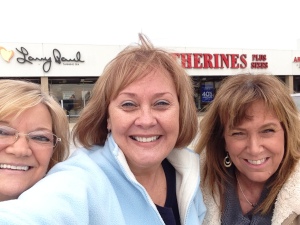 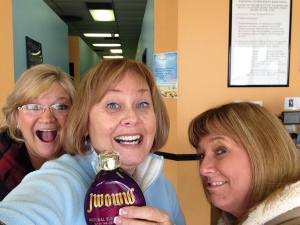 I tried to get back on a low carb diet; self-discipline is good for a widow, and anyone for that matter. My outlook was one of, “I’m going to be ok.” If I would dwell on Roger and think about him in specifics, it was hard. I still saw him as that ever-so-sick person in the bed during those last days. But focusing on the future helped greatly.

One Sunday after church I decided to go to the cemetery. I hadn’t been there alone, and since it was a snowy sunny day, I drove in before I went home.  I sat. I looked.  I cried. I got out and took pictures.  And I cried.  I went back into the car and sobbed and sobbed. I knew it was just his body.  I just missed him so much. 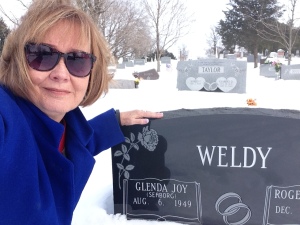 Alone at his grave

In the car crying 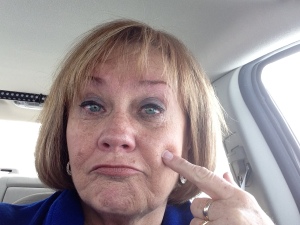 I told you I wasn’t pretty when I cried.

I posted this on Facebook and found the comments and perspectives interesting. Some said, “I don’t focus on the grave; I focus on where he is now.  That’s why I don’t visit his grave.” Others said that they find it healing to sit and talk to their loved one.  For me? I have never felt that I HAD to go visit him; it was just a good thing for me to do.

I had decided to travel to Chad’s in March to see some of his children in a school play, and because our Taurus had so many miles on it, I wanted to rent a car. I checked Enterprise on-line, and then texted good friend Will, who worked there. He said he could do it for less, and because I was in the system it was a smooth transaction. When he said it was all taken care of, I just burst into tears. I balled and balled. I was so touched that someone was willing to be a blessing and willing to take care of me.

OBSERVATION: We would be in a sorry state if we didn’t have friends.

OBSERVATION: Humans deal with death differently; there is pretty much no right way to grieve.

HELPFUL HINT: Don’t be afraid to get help. Emotional and Spiritual help. You may think you have it all together or think that you can journey the storm alone; you can’t. Well, you can, but it will take you longer than you want!

HELPFUL HINT: Don’t be afraid of doing something crazy. But not too crazy.