Chapter 13 – Getting Worse and Not Seeing the Signs

Each day got worse.

When you are living in real time, things obvious to the outsider are not so clear to you. I know I was still afraid and frustrated by not knowing exactly how things would progress, but I think back and realize that I was oblivious about how much he was declining.

By October 25th he was sleeping more, eating and drinking less, which meant urinating less. He had slurred speech, or no speech. I found that he would prefer showing what he wanted rather than speaking it. His hands became very shaky—even tremor-like. When he did any activity, he became breathless.

I am currently part of a closed Facebook group for people or caregivers struggling with glioblastoma. As I read the posts now, I can see that Roger had many symptoms that I did not recognize. I’m still not convinced he had a stroke, but his tremors, lack of speech, shuffling, and sleeping makes me wonder. I do know that the tumor was invading and wrapping its hideous fingers around his brain.

Mindless activities kept him occupied for hours on end. Cutting apart a card and taping it together, copying information from his wallet, lining up coins in rows—they were all similar routines from life before the tumor. Just not purposeful. 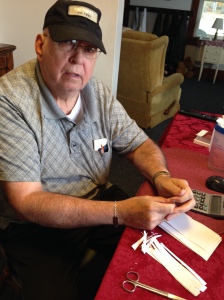 I was thrilled that Chad, Stephanie and the kids were able to spend a weekend helping me and watching Roger. I felt such a relief with their presence. I didn’t feel alone.

Happy to walk with Steph

Stephanie and I walked two miles; it was refreshing to get out of the house and do physical activity.

While I was at a concert, Stephanie thought it would be good for Roger and Lance to Face Time. When Roger saw Lance’s face and heard his voice, he really perked up. He told Lance that he should “stop drinking, stop meditating, stop thinking, and stop conversing.” Roger actually became agitated, and Stephanie thought it would be good to stop the call. Roger immediately wanted to get Lance back; he couldn’t figure out where he went.

So hard to leave

It came time for Chad and Stephanie to leave, and that was difficult for them. Questions like—will we see him again alive—will we make this trip again sooner than Thanksgiving—raced through their minds. It was hard for me, too. I was losing some sort of security with their presence in the house.

I had another scare. On the day Roger was to have routine bloodwork, we got up, and I fed, medicated and dressed him. On our way I decided to run in and get a polar pop. Ii thought, “What could happen in that short of time?”

When I came out of the gas station, what did I find? Roger sitting behind the driver’s seat. He was ready to drive to the pump and get gas. That was just another sign pointing to my new life with an adult who was like a toddler. I had to watch him every minute! And though I could pick up and carry a toddler, I could not budge a 225 pound adult. I didn’t know if I would be able to get him out of the house for the next blood draw.

Something I never thought I would have to do:

I shaved my husband’s whiskers.

Oh my. I have repeatedly said through all of Roger’s health issues that I AM NOT A NURSE. I get squeamish at sores, blood, stitches, etc. But his beard was getting too long; I had to do something. It’s funny what you can do when you have to do it.

Medicine. A new problem. Like I said, I’m not a nurse, but I do know some nursing stuff. Most medicine should not be chewed. Especially timed-released ones. By the end of October he was starting to either chew his pills or hold them in his mouth. So I started giving him his pills in stages to make sure he swallowed them.  It thought we were doing great until he spit out his Bactrim in the toilet. I made a mental note to ask the nurse what to do.

He never complained about headaches…

He opened ALL THREE BANANAS.

Soup and selfie with good friend.

Sitting on the porch

His eating routines started to get “odd.” He would organize his food. And ask for more plates. And rearrange things. He didn’t want his food to touch. In fact he became a neat freak, which, as many of you know, was so not like him.

He paced. He was restless. Especially when I was tired and wanted to lay down. Another worry. What if I was tired, and he wanted to be awake and roam? How long can I do this without any supplemental help?

–Scott Krippayne, from Sometimes He Calms The Storm Lyrics

This entry was posted in Brain Tumor, Getting Worse, Glioblastoma. Bookmark the permalink.