Chapter 12 – It’s Coming and There Is Nothing You Can Do To Stop It. 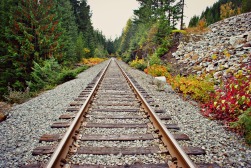 The Train Wreck Is Coming

Pardon the digression from the storm analogy, but this quote fits this blog perfectly.  Shauna Emmons shared this on a site I frequent, and I asked if I could share it.  She said yes.

We are standing on the train tracks and a train is coming and there is nothing I can do to brace myself or my kids. I’m watching it head straight for us. Others are watching it head straight for us. They know it’s going to run us over and they want to yell, scream, help….but none of us can do anything but watch it run us over. We will get up again, we will pick up the pieces, but for now all we can do is stand here and wait for the freight train to destruct us. It will destroy pieces of us, taking away parts that we feel like we can’t live without. There are no options but to be run over and feel destruction. As hard as I try to prepare or to be ready, there’s nothing I can do to truly prepare for impact.

So I see that look in so many people’s eyes of “oh honey, you don’t even know what’s coming” when I sit here with a smile on my face saying we will be ok. I’m not naive, I know it’s coming. I see it coming too, and it terrifies me. But I also know there’s no way to brace for impact. So it will have to run us over. We will feel the destruction and our world as we know it will crumble around us. And then we will pick up the pieces, and we will survive a day at a time in the dark until we are able to see the morning again.”

My days become dark and scary; but there is still a little humor.

On October 18th I emailed the kids a description of what happened when I left Roger with friends to take care of him.

Kids. You know I was concerned and scared about my concert at 4:00 pm (2 hours away from home) and having to leave daddy from 12:30-9:00 pm. Well, it went just fine and I shouldn’t have worried.

I asked Dave S. and Bill F. if they could sit with him, Dave first, and Bill when he got off his bus route. So with the fear and concern of a mother leaving her baby for the first time, I left. Boy, was that an odd feeling.

Dave got there and Roger was sleeping, so I explained routines to him and we left. I had left phone numbers for someone to text during the concert just to let us know that things were OK. On our way back home at about 6:30, Carol gets a call. It’s Bill. She couldn’t understand him so she handed me the phone.

Apparently Roger and Bill had gone to Bill’s house to let Bill’s dog out, and when they came back to our house, they found they were locked out. Daddy doesn’t usually carry his keys. So, I calmly (chuckling inside) told Bill that he could use the code on the garage and get in that way. Bill said OK. I told him to call if that didn’t work.

Forty-five minutes later, we get another call. Roger and Bill couldn’t get the garage door open. So, I told Bill that Roger had hidden a key in the old shed on some nail, and described where he could find it.

(Roger always hid important things in a cryptic manner. That was how he rolled.)

While I was listening, I could hear daddy looking for it with Bill using his iPhone flashlight to guide him. No luck. So I said I would call our neighbor Sally. She had a key and was close. Sally said sure, she’d be glad to come. Then I call Bill and say Sally is on the way and he said, “Don’t worry. We are in the house now.” I guess they had found another key that we had hidden. Sally came, and they all had a good laugh

We chuckled so much on the way home. I said to Gary that I remembered expressing some concern about leaving Roger with Bill for another concert (it got cancelled), and Gary said, “I don’t see why you would be concerned.” HA. Last night he said, “Bill can watch Roger, but now who are we going to get to watch Bill?”

Anyway, I got home and Bill had done the dishes. Roger had slept a lot, but he was awake and seemed none the worse for the adventure. I really appreciated Bill’s help.

When I look through my journal, I am amazed that I wasn’t a total basket case. Roger’s mind kept getting worse and worse, and though I kept it together for the most part, I felt that the crash was imminent.

And life was interesting when there was only one driver, two adults, and one couldn’t be left alone. We took the car to Bob Ridings for service, and then the service driver drove us home. I got a call—it was a wheel bearing. But they couldn’t fix it until the following week, so the driver came back to our house to pick us up. Then I had to drive us back home.

One night our daughter Lisa face-timed with us, and I began to realize two things.

I don’t have any pictures for this blog entry.  Maybe a glimpse of us on our wedding day will let you see what we looked like 43 years ago!

We kept a routine appointment our Primary Care doctor, and as we sat in the waiting room, I was feeling sorry for myself. A woman came in with her husband in a wheelchair. She was so loving to him, and so kind and patient. He was pretty impaired, and it struck me that my problems were nothing compared to hers.

As we talked to the doctor, I broke down and sobbed. Roger was sleeping in the chair next to me, and she asked how I was doing. Tears. And more tears. I told her I knew that this was not as bad as it was going to be, but sometimes I felt so overwhelmed. And that day was one of those days.

We left the doctor’s office and had lunch at Dairy Queen. He told me how he was riding horses, and how hard it was to get them out of the barn at DQ

I asked him, “What is going on in your mind?”

He said, “I’m just trying to figure out my mind.”

He asked me to go back outside to get Mrs. Weldy.

I asked him if he knew who I was.

He was rapidly declining; even the way he held his mouth was different.

That night he laid down to rest, and I kissed him. I cried some more, and sobbed and sobbed.

I was so afraid.

I didn’t know who to call.

7 Responses to Chapter 12 – It’s Coming and There Is Nothing You Can Do To Stop It.