Now it is March.  Four months after my hubby’s death.  It still stinks.  I still miss him.  I’m still alone.  I still wish it was June 2014.  Before everything changed.

Ava and Grandma went on a road trip.  We had so much fun sneaking from St. Louis to Grand Rapids to surprise Grace.  Ava and Grace have a special kind of cousin relationship.  They are the same age, look completely different, but get along famously.  Grace and Micah were in their school’s play, so that made for a great reason to head north. 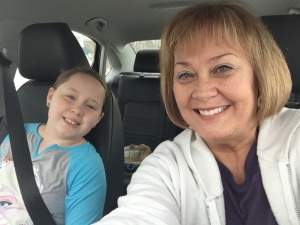 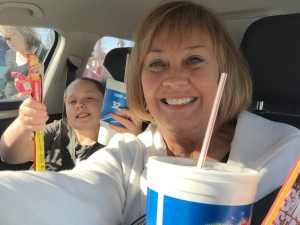 On the way back home–with junk food!

The kids were great actors; I was amazed at how well Micah did.  He had one of the leads and surprised me with his acting and singing capabilities.  His character had the qualities that all kids should have. I cried tenderly. Roger would have been so thrilled.

I was able to spend the following weekend in March with Lisa in Grand Rapids.  Actually, her friends called me (without her knowing) and asked if I could come up, because, according to them, “Lisa is a little crabby.  We think she needs some ‘mom’ time.”

I arrived at school.

We were so glad to see each other.

I made Hamburger Pie for Lisa to freeze. 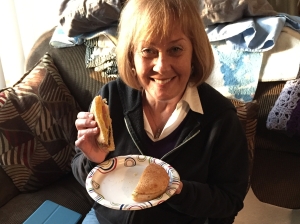 I’m glad I went.  I found that I needed some “Lisa” time, too.  She teaches at a Christian School in Green Bay, and like anyone who works in a small school, she is involved in many parts of that ministry.  She coached a duet acting team in the state fine arts competition. I attended MACS with her and actually felt good being around kids in an academic setting.  It felt “comfortable.”

The boy/girl duo did so well that they were asked to perform at the awards assembly.  Imagine how excited the school was to find out that they qualified for nation competition!

I sang at Lisa’s church that Sunday morning; it was another of several “firsts” for the weekend.

After church she was playing an old Weldy Family CD, and the song “The Glory of Children is Father” came on.  As soon as it was over, I turned it off and cried.  The words were so touching.  “Father, we need you, we love you.”  We both cried, and it was good.  We needed that cleansing. Here is a short clip for you.

Before I left, Lisa and I made another one of our famous videos.  We capitalized on the great year that the kids at Bay City Christian School were having. 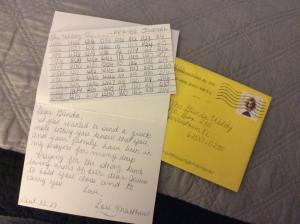 When I returned from Wisconsin, I opened my mail, look what I found! Two things struck me. 1. I was humbled by the time my dear friend took to mention us in prayer and encouraged to look at those dates, realizing that someone was bringing us to the throne of grace on those dates. 2. I was challenged and convicted that my prayer life stinks. Bless you, Lori, for encouraging me.

The nights became easier.  It was lighter outside, and I became purposefully busy at night.  I began to wonder if I was easing into a new normal.

It was during this month, four months out, that I gradually envisioned him in better settings, not on that hospital bed, semi-conscious, struggling to breath, swallow, live.

Yes, when I reflected on March, I had to acknowledge that things were generally better.

I was nervous and my heart was beating fast.  It was the first time I had ever done it. Alone. Driving to Monticello to actually buy a vehicle.  The closer I got, the more nervous I became.  Why?  Roger had always done it. Several times he took me with him, but he soon learned to leave me home because I would be his nemesis. To him, I was willing to give the car salesman ALL of our money.  I’m thankful that he let me come with him a few times. At least I knew the route for test driving vehicles.

I got to the dealership at about 3:45. Troy was busy with another couple, but he managed to let me drive some vehicles until he could get to me.  Previously I had told him what I wanted and what I thought I could afford, so he let me drive several that fit the criteria. One didn’t have power seats, one wasn’t a good color. I was concerned about blind spots in the new small SUVs, but I found that all the ones I drove were fine.

After I drove five possible vehicles, I told him I could afford to pay more for fewer miles.  I sat in a 2013 Escape that had only 18,000 miles and knew immediately at it was for me.  I drove it, talked about it, and I asked him if I should drive anything else.  He said, “Why. You will just complicate your choice. If you have found the one you want, why look more?”  That was a good point.

We sat at his desk and he explained the process, asked if I wanted a loan, and then I asked the question: “Is this price firm?”  (Learned that from Roger!) We talked about Roger, and how he always went back and forth with him about trade in versus sale price.  Troy said that either he gave more for the trade in or reduced the sales price.

But then he offered to help me even more.

After checking out the trade in value versus selling it on the street, and explaining sales tax, trade in, etc., and having someone drive our old Taurus, he came back and said what he could do.  He gave me as much as I could get on the street for the trade in and lowered the price.

I still wonder, like Roger always did, if I got the best deal. That’s human nature.

At the very beginning I had told Troy:

I’m a little afraid that you will ask me for all my money and I will give it to you (ha), so I may have one of my sons come and help me on a Saturday. I feel comfortable test driving something on my own, though. I’ll always remember when Roger would come home from dealing with you. Every other time he would say, ‘Boy, I think I got taken this time. But the last time he gave me a good deal, so I guess it evens out!’ I’m praying that this time was Roger’s turn to get a good deal.

But as I thought through the deal, I found that it was exactly the amount when I added the money I got from selling the truck and the AFLAC insurance money I was expecting.  I didn’t have to go into savings.

Bottom line? I felt good and knew at this time it was a good decision.

I went home and could hardly sleep that night! 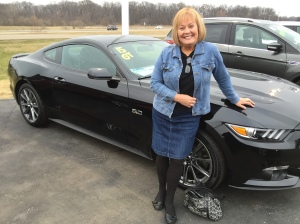 No, I didn’t get this Mustang!

There it is. I bought a car.

The following Monday I picked up the car. I drove home and kept thinking, “Wow, this is amazing.”  I got home and thought, “I hope I did the right thing.”  Suddenly it dawned on me:  I had never even looked under the hood. For all I knew there could be little hamsters under it running in little wheels! 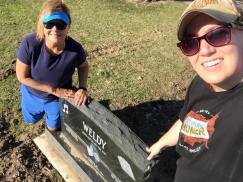 Lisa came home the week before Easter for break. We did a little jogging, and we decided to run through the cemetery.  We just had to stop by the place where his “shell” was.  We cried.  But it was ok.

The running we did was in preparation for the Penguin in the Park 5K.  I had not run very much, as my hips were really bothering me.  But we thought we could have fun doing the race.  No pressure to be great.  Just run and have fun.

Here’s a link to my blog about running.

And here comes another first:

Easter was approaching.  My first without Roger.

I got the mail and found a box with a chocolate Easter bunny.  It meant so much to me, because my daddy used to give me one each year…until he died.  Roger continued the tradition after that.  I got teary-eyed when I saw my “first” Easter bunny as a widow—from Chad and Stephanie.

OBSERVATION:  Music can play an important part in healing during a heartstorm.

OBSERVATION:  Often you are not aware of friends who are supporting you through your heartstorm.

OBSERVATION:  Traditions can send you into reflective and sometimes heavy moments.

HELPFUL HINT:  Doing difficult things can make you stronger.  Don’t be afraid to step out of your comfort zone.

HELPFUL HINT:  Keep laughing.  Keep living.  Keep loving. What you do now will be memories in the future.

HELPFUL HINT:  Sometimes you may feel like you are suffocating with grief.  Give in to it.  You will breath again.  Trust me.