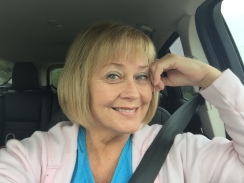 After coming through one of the saddest and most depressing times of my life, I began to emerge a different person.  The overwhelming balm of peace in my soul couldn’t be explained.  I wasn’t panicked about what the future held.

Dear friend, Kathy loaned me a book to read, and it seemed that many parts were beautifully written just for me.  Missionary Elisabeth Elliot, having once become a young widow, and then again later in life, wrote Loneliness based on what she learned through those experiences.

Indulge me as I share some portions that especially spoke to me.

I wonder if, for a moment or two he might have felt as I sometimes do:  I will not relinquish this misery, not right now.  God has taken what I most wanted.  I have a right to feel sorry for myself.  I have been wronged.  I will refuse for a while at least, any offer of comfort and healing.  Don’t speak to me of joy.  You pour salt in my wounds.  Let me lick them for while. (in reference to a quote by George Matheson.)

Widowhood taught me another kind of loneliness.  My social life was for the most part limited to Quichua Indian friends.  I had never been anything but a misfit with Indians, being so incorrigibly white and tall and foreign, but I was used to that and so were they.  We all took it as a great source of amusement.  I was not quite so amused to discover, on the rare occasions when I joined other missionaries, that I was not a misfit with them too.  In some ways all single people are misfits in society, just as someone who has lost a leg is handicapped.  God meant for everybody to have two legs apiece. We don’t notice them when they are both there, but if one is missing, it’s noticeable.

In spite of this modern shuffling of ancient norms, social gatherings are still often made up of what we (sometimes loosely) call couples.  As a widow, I never enjoyed being a fifth wheel.  I threw things off balance simply by being there, but this was a reality I had to come to terms with.  It was nobody’s fault.  It would be silly to protest that the married people were supposed to do something about my feelings in the matter.  Many of them tried. Everybody was kindness in the beginning hovering over me, offering help of all sorts, inviting me out.  Many continued to be kind when the so-called grieving process was supposed to be over, but there was nothing in the world they could do about my not being half of a couple anymore.

… Loneliness in my experience is not relieved by just anyone’s company.  It needs to be someone special—someone who understands me, someone who can listen and be there when I need them. It was this last part that forced me to confront the depth of my own loneliness. Of all my friends, no one person could be with me all the time.  And even if they could, none of them had the power to do anything about my situation.  It was ultimately my problem.

On Lack of Motivation—

Yet I find that events do not change souls.  It is our response to that which finally affects us.  I find that though I am in a new place of yieldedness before Him who has thus planned my life, little things remain between me and Him–big things in His sight:  lack of patience with the Indians, laziness in myself, failure to discipline myself to prepare properly for school, etc.

On Who Can Meet My Needs—

What would you say to a daughter who is about to divorce her husband because he isn’t meeting all her needs?  I said I would try to point out to the poor girl that she is asking of her husband what no human being can ask of anybody…The Bible promises that my God, not my husband, shall supply all my needs.

During February I continued to work on jigsaw puzzles.

After lunch with good friend Kim, I realized that she was right.  I had just completed a 1000 piece puzzle that, at the beginning, seemed insurmountable.  I couldn’t even find the edges.  But I pursued.  And I completed it.  Kim said, “You see?  You did accomplish something.  You were motivated to complete something, and you did it!

I was still going strong by mid-month.  I purposed to eat regularly, drink water, walk each day, and write notes to other people.  I even made reservations to go to Florida again with Chad and his family.

And I gave blood.  I had been giving blood for a long time.  Even before Roger’s liver transplant.  By the time he had the transplant I figured our family was just about even with the blood bank.  He used over 50 units of some sort of blood product during that adventure, and that was just about what I had donated.  So now I felt like I was actually donating for someone else’s benefit.

But I had stopped when we were dealing with his brain tumor.  Now It was time to get back to doing something for someone else.

Roger. Oh how I missed him.  I read the framed letter I wrote to him before he had his total colectomy in 2013.  It made me tear up.

This Valentine’s Day will be an unusual one for us.  You will be in the hospital having some life-changing surgery.  The most important thing I want you to know is that

I WILL BE THERE FOR YOU.

* You were there for me when I had our babies.

* You were there for me when I tore a ligament in my thumb.

* You were there for me when I broke my foot.

* You were there for me when I had back surgery.

* You were there for me when I had challenges as a teacher.

* You were there for me when I struggled being a principal.

* You were there for me when I wanted to give up.

* I was there for you when we changed pastorates.

* I was there for you when we resigned UBC.

* I was there for you when you began your health problems.

* I was there for you when you got your new liver.

I just want you to know that~

I love you so much.

Steven Parker Weldy II, named after Ava’s fish who succumbed several years earlier. She named hers from an insurance agent on a billboard near Eureka, MO.

I got a fish.  Well, my friend Kari and her mom Helen gave me a fish.  I figured if I woke up in the morning and he (Steven Parker Weldy II) was not floating on top of the water, it was going to be a good day.

Lance sent me Valentine’s flowers and a 1000 piece puzzle.  For some reason I found I loved to do puzzles.  Maybe it kept my mind busy.  It did give me something to do.  In fact, I found it was hard for me to stay away from it.  Lesson learned:  Sometimes I had to walk away, and take a break to return with a clear mind.  Then pieces seemed to fall in place.

I continued to have a great month.

One night I went to sleep at about 10:00 and was wakened suddenly with a noise like some rocks or metal had dropped on a concrete floor.  I heard distinctive noises coming from the floor of my closet.  It was enough to scare me.  Enough that I grabbed my bat.  Probably an animal, I thought.  So that night it was just me and the bat in bed together.

The next morning I opened the garage door and found animal scat…probably a raccoon.  There was something in there!

Gary and Carol came over and helped me set a trap, and that evening I heard even more sounds.  Enough for me to put a chair in front of the closet door.  I was so afraid that something would come through the floor, and open the door and get me.  So afraid that I kept the TV on all night so I wouldn’t have to hear the scratching noises.

The next morning I checked the trap.  No animal.

I called Chad and he suggested getting some de-con and sticky strips.  So I did.

That situation confirmed the underlying feeling I had.  ALL. THE. TIME.

That evening I heard no sounds at all.  I was beginning to think it was all in my mind!

But by Saturday morning I heard another rustling in the back of the garage.  I moved the car out, and by the time Gary and Carol had arrived—we had a concert in Joliet and were meeting at my house—I opened the kitchen door to the garage and BOOM!  There it was.  An opossum.  It just kind of sat there and moved slowly in circle, kind of sick-like.

After considering our options (shooing it—wouldn’t budge; shooting it—probably not safe or legal) Gary pushed it out with a push broom.  That critter grabbed on to the broom handle ferociously with its teeth—still dazed. 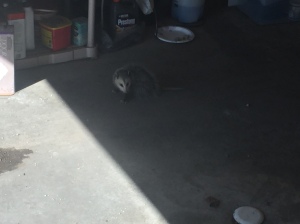 There he goes outside.

I was still sensitive to missing Roger’s presence.  While at the church service after our concert in Joliet I was sitting next to Gary and Carol, and I was keenly aware that he put his arm around her like Roger did with me.  I wasn’t jealous or anything like that.  I just missed that gesture.  I didn’t have anyone to do that to me.

And then there was a snow storm.  Lights flickered about 20 times.  I prayed that they wouldn’t go out because I wasn’t sure what I would do to stay warm.  Roger always knew what to do.  He would bring up the kerosene heater.  He would take care of me.  Yes.  I was still missing Roger.

OBSERVATION:  Sometimes, like with a jigsaw puzzle, you just need to step away for a bit.  Come back to it when your head is clear, and the pieces will easily fall into place.

HELPFUL HINT:  Life goes on for others, and it can for you.  While you are surviving, growing, stagnating, thriving, denying, or hiding, don’t feel bad that everyone’s life but yours goes on. Yours will eventually.

HELPFUL HINT:  Sleep with a baseball bat if you are afraid!